Heineken fizz falls flat as half-year profits drop
Dutch brewing giant Heineken had little to cheer Monday as it unveiled a 48.8 drop in half year net profits, warning of "a challenging economic backdrop".
Go Back 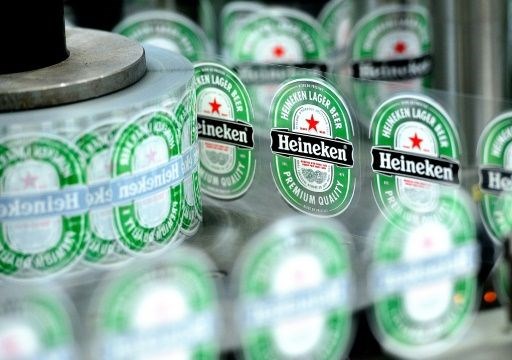 Year-on-year net profits in the first half of 2016 fell to 586 million euros ($654 million) from 1.14 billion euros the previous year, Heineken said in a statement.

But it stressed the 2015 results had been inflated by “the exceptional gain of 379 million euros” from the 1.2 billion euro sale of its Mexican packaging arm Empaque in February 2015.

But the world’s third largest brewer reported an increase in volume and sales, with revenue of 10.1 billion euros, up from 9.8 billion euros in the first six months of 2015, a 4.7 percent rise when adjusted.

Founded in the 19th century, Heineken produces and sells more than 250 brands including Desperados tequila-flavoured beer, Sol and Strongbow cider and employs about 73,000 people around the world.

“After a strong first quarter, boosted by Easter timing and a strong Vietnamese and Chinese New Year, volume growth in the second quarter was more subdued,” the Amsterdam-based company said.

Chief executive Jean-Francois van Boxmeer warned of “adverse economic conditions in some developing markets and currency headwinds” in the coming months ahead.

“Whilst Africa, Middle East and Eastern Europe continued to be challenging, performance was strong in some key developing markets such as Vietnam and Mexico,” he said in a statement.

Cider sales were also looking rosy, Heineken said, with sales of such brands as Strongbow doubling in Europe, while the apple-based beverage posted double digit growth in Canada and Mexico.