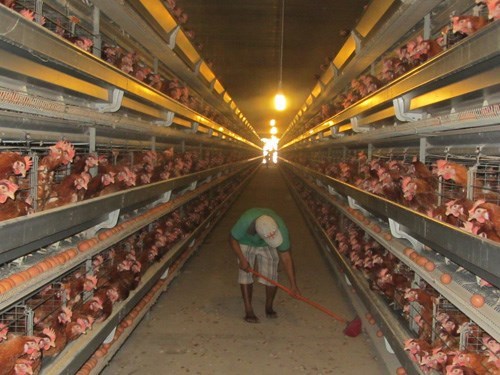 A man working at a chicken farm in the southern province of Dong Nai. Photo: Bach Long

As Vietnamese poultry producers are seeking an anti-dumping case against US exporters, experts have warned that without improving their own productivity and cut costs, local breeders will eventually lose their market to both regional and international rivals.

The warning was heeded at a Friday meeting in Hanoi, where Nguyen Thanh Son, chairman of the Vietnam Poultry Association, pointed out that although local chicken production grew at a fast pace between 2003-2012 — 9.3 percent a year compared to the world rate at 3.7 percent, Vietnamese productivity is lower.

For instance, in 2010, it took local big farms an average of 49 days to raise a 2.2-kilogram chicken, and it was much longer for small farms, news website Saigon Times Online quoted Son as saying.

Elsewhere around the world, the time needed was 37-41 days, he said, adding it was expected to be even shortened further to 31 days by 2020.

Meanwhile, most of chicken production’s inputs are imported, from breeds and veterinary drugs to animal feed.

As a result, Vietnamese chicken products’ prices are 1.5 times higher, or even twice the world’s, Son said.

In fact, Vietnam cannot compete with even Thailand, where it costs only $1.2 to produce one kilogram of chicken, compared to $1.6 per kilogram here, Agriculture Minister Cao Duc Phat told the meeting.

“I’m very concerned. Thailand can post up to $4 billion a year in chicken exports, while Vietnam is still struggling to keep its industry alive,” the minister said.

He was quoted as ordering relevant agencies to make field trips to the neighboring country to learn how to improve local productivity.

In the meantime, many participants were concerned that with the lack of competitiveness, Vietnam’s chicken products will hardly rival Thai imports when the ASEAN Economic Community is established at the end of this year, allowing free flows of goods.

Last month the Southeastern Poultry Association, which represents more than 3,000 breeders in Ho Chi Minh City and nearby provinces like Binh Duong and Dong Nai, announced that it is preparing to file an anti-dumping lawsuit against US chicken thighs.

It claimed that the fact that US chicken thighs are sold “unreasonably” cheap at VND20,000, or 90 cents, per kilogram here has driven its members to huge losses.

US producers have rejected the claim.

As of July, Vietnam’s chicken imports were equivalent to 64.3 percent of those last year when more than 100,500 tons of chicken were brought into the country, according to the agriculture ministry’s statistics.