Huge challenges still facing Vietnam's economy
It has been five years since the economic restructuring programme was launched, and despite some improvements to the Vietnamese economy, there has been little change in the growth model.
Go Back 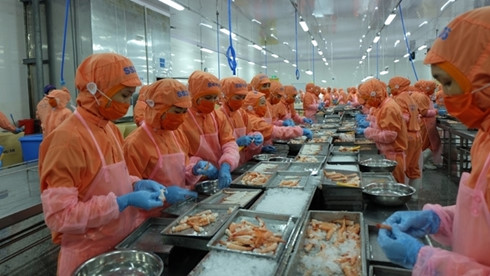 For that reason, many have called for a reconsideration of the restructuring methods used over the past five years, saying that identifying their drawbacks and working out solutions to them will push through and steer restructuring efforts onto the right path in the time ahead.

The restructuring programme for the 2011-2015 period brought about some noticeable results, but failed to meet many fundamental targets.

According to Tran Dinh Thien, Director of the Vietnam Institute of Economics, restructuring is a key task to which prominence was given by the 11th Party Central Committee.

But when it was put into practice, the process took place at a very slow pace. He said the problem might lie in a lack of motivation for restructuring, which led to results below expectations.

Specifically, the public investment mechanism was in fact largely unchanged and was still based on the practice of asking and giving, while the budget was increasingly strained and public debt was growing quickly.

The banking system has weathered the storm, but the mass of bad debt has remained mostly unresolved and has even grown in size.

The system is in the process of cleaning itself up by having weak banks removed, but it is still very fragile and is operating on a weak foundation.

Furthermore, enterprises remain weak—especially domestic ones—both in the state and private sectors, which are smaller and less competitive than their foreign peers.

Thien adds that the government has equitised numerous state-owned enterprises, but that the amount of capital sold to the private sector through equitisation, which is in effect the reallocation of national resources, only accounts for between 10% and 15% of the total capital owned by equitised firms.

He notes that this rate is too small to change the corporate management system—the key factor in improving the performance of enterprises.

Nguyen Dinh Cung, Director of the Central Institute of Economic Management, also states that the purpose of economic restructuring is reallocating and streamlining resources, but after five years state capital and assets remain sizeable and continue to rise while their efficiency remains low and is even falling.

Thien says the context of Vietnam’s development in the years ahead will be totally different.

Integration has reached a new period with more substance and a range of new free trade agreements to which Vietnam is a member have come into effect or will soon.

Therefore, Vietnam must make radical changes to increase its internal strengths in order to hold on to these structures and make its way upward.

This means that Vietnam has to radically restructure its economy, but in a modernised way and in compliance with its integration commitments.

Cung also states that restructuring in the time ahead must take into account the reallocation and effective use of resources with a focus on state-owned enterprises and the banking system.

Furthermore, bold reforms must continue to improve the business environment in all respects, from the protection of assets ownership to market participation.

Le Xuan Sang, an economic expert, says Vietnam has many points of strength that will speed up the economic restructuring process.

First is the political factor that the Party and Government have set out an ambitious reform agenda to push through the implementation of integration commitments and the restructuring roadmap.

Second, new-generation free trade agreements such as the Trans-Pacific Partnership will have both direct and indirect impacts on the economic restructuring process and institutional reform.

They will force the government to change its mindset, its formulation and implementation of policy and its model of governance to make way for a more transparent, professional and accountable Government with democratic and market-friendly institutions for the benefit of enterprises and the people.