Indian design helps Vietnamese student to inspire Australian youth
Based on an Indian model, a Vietnamese university student has released an artful set of 29 alphabet letters to promote his country’s bewitching charm, which has been chosen by many expats and travelers as an electronic guidebook.
Go Back 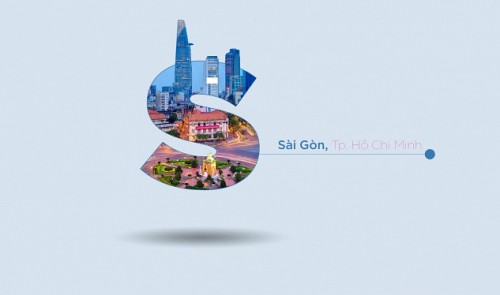 Luu Trong Nhan, 23, a student of the University of Finance-Marketing, takes great pride in his “Vietnam Typo – Alphabet Project,” which has recently been published on his Facebook page.

The project involves photos of the Southeast Asian country’s beloved places of interest blended with the 29 letters of the Vietnamese alphabet.

Each letter stands for a spot which begins with or has the letter in its name.

For example, C is associated with Con Dao Island, located off the southern province of Ba Ria-Vung Tau; while Ơ is linked to Cai Rang Floating Market in the Mekong Delta city of Can Thơ.

These 29 pictorial letters, arranged in the S shape of the Vietnamese map, take viewers on a graphic journey, enchanted by some of Vietnam’s most beautiful destinations.

Nhan’s work is re-imagining of a project called “Around the World with Type,” created by two design students from India, Rigved Sathe and Payal Jagwani.

In their project, in which each letter stands for a different city around the world, the Indian duo have engaged people on a fascinating global tour with type.

Hooked on the idea, Nhan emailed Sathe and Jagwani, expressing his wish for adapting it in his own work.

He also pointed out that while the Indian work uses the 26-letter English alphabet, he planned to use the 29-letter Vietnamese system, which includes letters with diacritic marks, a, ă, â, đ, ê, ô, ơ, and ư; while excluding j, w and z.

Responding to Nhan’s email, the two Indian students expressed their delight at the Vietnamese’s fondness for their work, and encouraged Nhan to complete his design and share it with them so that Indians could learn more about Vietnam.

Nhan said that he began his project by searching for popular destinations whose names carried the intended Vietnamese letters, as well as picking out popular tourist destinations, architectural and cultural icons in these locations.

The young man thoroughly studied various sources of information before deciding on the most appropriate destinations.

“One of the toughest jobs was picking the best photos, as those available for use are too many and diverse to choose from,” Nhan said.

The selected images are also supposed to fit the shape of the letters with the most esthetic effect, he added.

“Ideas kept crossing my mind, driving me to tirelessly work on the project for days on end,” he recalled.

“I created the collection both to indulge in my graphic passion and to tap into social networks to promote Vietnam’s tourism,” Nhan divulged.

“Tourism promotion activities are not exclusive or limited to local authorities. Everyone, particularly innovative and tech-savvy youngsters, can also lend a hand.”

He noted that as Vietnam abounds in amazing landscapes, there was no way that his project could fully incorporate them all.

She said that the work had sparked interest in and inquiries about Vietnam’s many picturesque landscapes.

“Not everyone is lucky enough to explore beautiful spots across the country’s entire length. Joining an imaginary tour like this is an intriguing idea which also soothes our homesickness,” she elaborated.

She added that some Australian students are now working on a similar project to accentuate their country’s tourism appeal.

Lisa, a 22-year-old student from France, has also shared Nhan’s special collection with her native friends.

The electronic travel guidebook has helped her work out her itinerary for her stay in Vietnam, with the most irresistible location being Ho Chi Minh City, depicted by the letter S.

Meanwhile, Moni Heintze, a 22-year-old girl of Vietnamese and German origin, has had Nhan’s collection printed into a wall calendar, which serves as a constant reminder of her second home country.

“The collection offers me the opportunity to introduce Vietnam to my friends. I want to visit Hue [the imperial capital located in the central province of Thua Thien-Hue], which is home to the royal palace, gentle women and lots of delicacies,” she said.

Nhan is happy at that his work is being embraced, adding the collection can be printed into posters, calendars, postcards, or photo books which can be gifted to foreigners as mementos.