Interest in VN food, beverage sector
The food and beverage sector remains a highly attractive one for both foreign and domestic players, many of whom have announced expansion plans.
Go Back 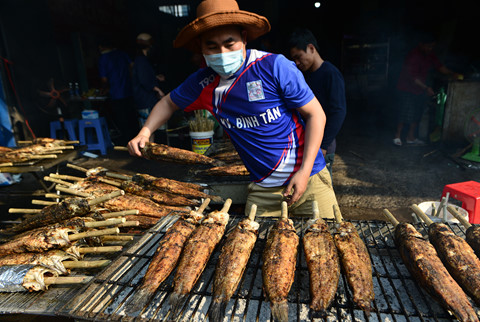 To mark its fifth year in Viet Nam, US beverage giant Starbucks opened a store in Da Nang in January, its 34th in the country.

While never disclosing details of the company’s business in Viet Nam, Starbucks boss in the country have always claimed significant growth and that Viet Nam remains a highly promising market.

On the occasion of the in Da Nang store opening, Patricia Marques, general manager of Starbucks Vietnam, said: “We have been asked many times when Starbucks will set foot outside of HCM City and Ha Noi: now it is time. And not just this first opening in Da Nang, 2018 will be a remarkable year for Starbucks Vietnam, I believe. There are more exciting plans to be executed this year.”

Depending on the situation, more stores would be opened in the central city while continuing to expand in Ha Noi and HCM City, she said.

Since opening in Co.op Mart Xa Lo Ha Noi in 2005 the company has been expanding steadily and is now one of the three largest restaurant chains in the country.

Earlier this year the company opened an outlet in Can Tho, its 100th in the country.

Dennis Flores, head of international business at Jollibee Foods Company, said, “Our business in Viet Nam has been a core pillar of our international operations, and will continue to be one of our most important markets globally as we continue reaching more families around the world.”

Lam Hong Nguyen, general director of Jollibee Vietnam, said they chose Can Tho to start expanding into the Cuu Long (Mekong) Delta.

The chain planned to open more stores in other provinces and cities, he added.

Cong Thuong (Industry and Trade) newspaper quoted her as saying her company would double its number of outlets by 2020. It now has four restaurants in HCM City and one in Ha Noi.

The company also aimed to make Viet Nam its second largest behind only Japan, Thuy said.

Red Wok Cuisine Joint Stock Company reported earlier this year that it had invested in Quan Ut Ut, a chain of barbecue and craft beer restaurants.

The investment by Red Wok Cuisine, which in turn has received investment from Mekong Capital Fund, underlines the potential of the country’s food and beverage market.

According to the company, the investment is a part of Red Wok’s market expansion strategy from now through 2021 to become a major food group with popular restaurant chains across Viet Nam.