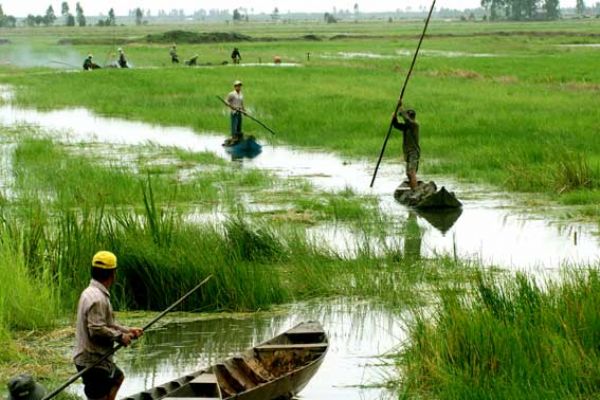 A research work by the National University of Singapore on the impact of the Manwan hydropower dam in China in the Mekong Delta showed that 160 million tons of sediment flowed to the delta each year in the past, before the dam was built.

Since the dam was put into operation, the figure has dropped to 75 million tons.

As such, a Chinese hydropower dam alone can lead to the sharp decrease of sediment volume. Scientists believe that the figure would be halved to 42 million in the future, once the other dams on the main stream of the Mekong in Laos and Cambodia become operational, according to Le Anh Tuan, deputy head of the Climate Change Institute, who cited the research.

Nguyen Minh Nhi, former chair of An Giang province, said Vietnam was reassured that the Chinese dam would not affect Mekong River Delta.

“In the past, the water always turned muddy on the fifth of the fifth month of the lunar calendar. However, the water stays limpid though in the tenth day,” he said.

“Since the sediment has been blocked on the upper course, it cannot reach the lower course any more. That is the ‘abnormal thing’ of the Mekong current,” he said.

Local people in the coastal provinces in the south also said they can see the sea water level rise.

Tran Manh Tinh in Bac Lieu province said that the highest water level last year was about 10 cm higher than that in the years before. It is estimated that the water level has risen by 40 cm in the last 10 years.

Thien cited some official reports as saying that the sea water level rises by 3 mm every year.

Laos is near completion of construction of Xayaburi hydropower dam with 70 percent of work done, while it is making hectic preparations to start the construction of Don Sahong dam.

According to Thien, once the dams become operational, the sediment imbalance would  increase, which means the risk of Mekong Delta disintegration would be even more serious.

The disintegration process may last hundreds of years if compared with the tectonic process which lasts thousands of years.

In the immediate time, the sediment decrease will affect the quality of soil.

“Deltas will die if they are not fed with sediment,” said Duong Van Ni from the Can Tho University.