Japan eyes Vietnam as production base
The chairman of HCM City People's Committee said at a conference held last Friday that the city sought continued support from Japan in the transfer of technology, ODA, management expertise and investment in several fields, including human resources, hi-tech agriculture, pharmaceuticals and tourism.
Go Back 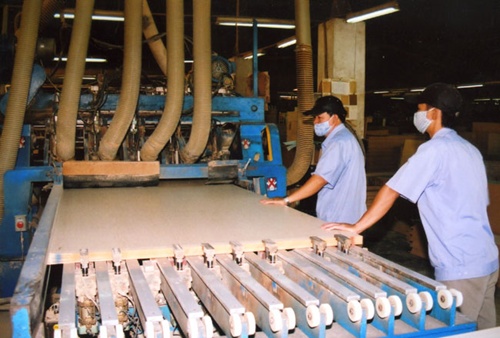 He said that Viet Nam had become a long-term investment site for the Japanese because of its convenient geographic location, stable politics, improved infrastructure and abundant and low-cost labour force.

With more than 865 projects with a total registered investment capital of US$2.87 billion, Japanese ranks sixth out of countries and territories having investment in the city, he said.

In recent years, Japanese visitors have ranked first or second in the top 10 of foreign visitors to the city, and the number of Vietnamese visitors to Japan has also increased significantly.

The city expects to continue to receive co-operation and support from the Japanese Government and enterprises to improve the growth , he said.

“The city will always welcome and create favourable conditions for foreign investors, including Japanese, who come to seek long-term investment and business opportunities,” he said.

Speaking at the conference, a special advisor to the Japanese Prime Minister, Iijima Isao, who also led a delegation of 22 Japanese businesses to HCM City, said he believed that Japanese firms would continue to invest strongly in Viet Nam, particularly in HCM City.

The Japanese busineses who visited the city this time are Japanese leading companies involved in pharmaceutical, medical, water and waste treatment, agricultural, transport, construction, logistics, manufacturing, tourism and IT sectors.

Vu Tien Loc, chairman of the Viet Nam Chamber of Commerce and Industry, said the country’s participation in a series of free trade agreements, including the Trans-Pacific Partnership, had made it more popular among investors.

Recently, many investors from Japan, the US and EU have visited Viet Nam to seek business opportunities, he said, adding that many companies had shifted their investments from China to ASEAN countries, including Viet Nam.

Masuda Chikahiro, deputy chief of the Japan International Co-operation Agency (JICA) Vietnam, said Japanese companies wanted to penetrate the market of nearly 100 million people in Viet Nam and use it as a production base for export.

He said that reform of the investment environment was needed to welcome a new investment wave to Viet Nam.

Japanese firms, he said, were striving to overcome two difficulties, including the rate of locally-made products supplied to Japanese producers in Viet Nam. This stands at about 33 per cent in 2014, much lower compared to some other countries in the region.

Secondly, the country’s human resources have yet to meet requirements of Japanese firms, he said.

Viet Nam should solve issues such as these mentioned in the Viet Nam-Japan Joint Initiative, he said.

At the conference, Pham Thiet Hoa, director of the Investment and Trade Promotion Centre of HCM City, told Japanese investors that the city was seeking investors for the 27.2 km monorail line No2 and the 6.3km underground monorail No6 projects, as well as the underground mall project at the Ben Thanh Central Station and the Saigon Safari project in Cu Chi District.

A delegation of 46 Japanese firms has arrived to the southern province of Dong Nai to seek investment opportunities in the locality, according to the provincial People’s Committee.

The firms specialise in wide ranges of industries such as transport, construction, manufacturing, food and agriculture in an addition to securities and tourism.

During their trip to Dong Nai last week, the Japanese enterprises met with local leaders and enterprises while hearing about the province’s investment potential, especially in the tourism sector.

Located in the country’s key southern economic zone, Dong Nai has become an attractive destination for many Japanese investors. More Japanese investments are expected to come to the province in the time to come.

Among 40 countries and territories investing in Dong Nai, Japan is the third largest foreign investor with 205 projects capitalised at approximately US$3.7 billion as of March 2016, according to statistics from the provincial Department of Planning and Investment.