Japanese firm plans to set up solid waste treatment plant in HCMC
Japanese environment company Toyobo has expressed interest in building a plant to recycle and produce energy from solid waste in Ho Chi Minh City, given the city’s huge demand for waste treatment.
Go Back 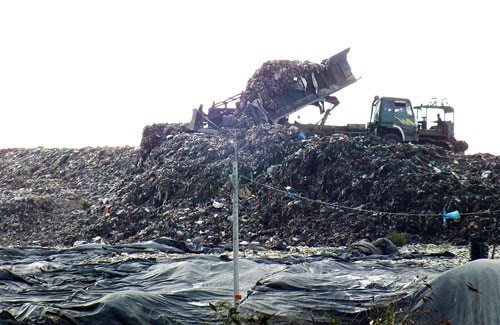 A garbage site in Ho Chi Minh City where all will be buried. Photo: Hai Nam

Koji Koji Chiba, a Toyobo board member, said at a meeting in the southern metropolis Thursday that the company plans to treat waste using the same technology it has been developing in India, the Philippines and Singapore.

The procedure includes fermentation using microorganisms and a drying process to separate metal and plastic from waste and keep the organic part for power generation, Saigon Times newspaper quoted him as saying.

He said the technology does not require the waste to be segregated, and that it is an appropriate solution for Vietnam where segregation is not common yet.

Ho Chi Minh City discharges around 7,000 tons of household waste every day, not to mention a huge amount of industrial waste, and most of it is buried, according to official figures.

City chairman Nguyen Thanh Phong said at the meeting that he is ready to give the company a license by September if it can furnish a detailed plan soon.