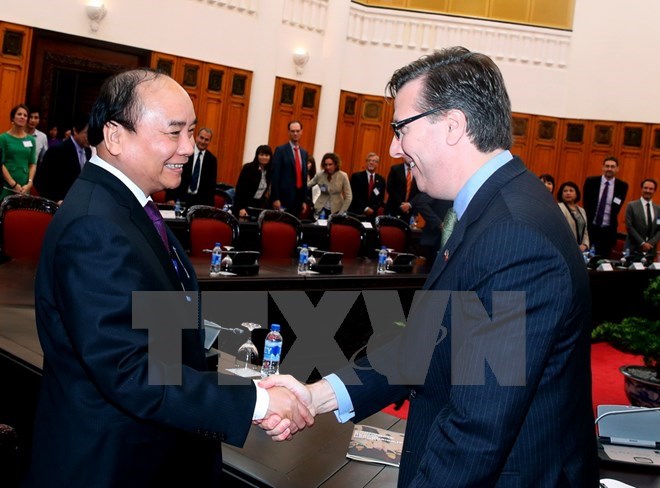 He received a US-ABC delegation led by President and CEO of the council Alexander C Feldman at the Government’s headquarters in Hanoi on August 25.

Vietnam-US relations, especially their investment and trade ties, have made progress over the past decade, he stressed, appreciating US businesses’ assistance and cooperation with their Vietnamese peers, particularly the help given through the Vietnam Chamber of Commerce and Industry (VCCI).

The Cabinet chief said his Government is changing its leadership style with the aim of best serving people and businesses. It is ramping up administrative and policy reforms so as to create a more transparent and proficient institutional environment which is crucial for facilitating foreign investment in Vietnam.

With those efforts, the Government expects to provide a good prerequisite for effectively implementing the Trans-Pacific Partnership (TPP) agreement and helping companies operating in the country to capitalise on this deal, the PM said.

He noted that his Cabinet completed a dossier for TPP ratification and the National Assembly is set to consider approving this trade pact in October 2016.

On behalf of the US-ABC, Alexander C Feldman said his delegation to Vietnam comprises representatives of 37 leading businesses in the US, which proves US firms’ interest in partnerships and investment opportunities in the Southeast Asian nation.

US enterprises want to contribute to the local economic development and will ensure their social responsibility while operating here, he said.

At the meeting, many other US entrepreneurs spoke highly of the local investment climate which, they said, is being improved. They also expressed the resolve to do long-term business in Vietnam and become a trustworthy partner during the country’s development.

He met with a delegation of the council led by its President Alexander C Feldman at the parliament’s headquarters in Hanoi on August 25.

Hien appreciated practical and effective contributions by US and ASEAN enterprises to Vietnam, noting that his NA has continually provided the best possible conditions for foreign investments, including that from the US.

He assured that the Vietnamese parliament is working to fine-tune the legal system, which includes laws pertaining to the market economy mechanism.

He asked US companies operating in Vietnam to pay more heed to environmental protection and social responsibility while helping the host nation in manpower training and technology transfer.

Regarding the Trans-Pacific Partnership (TPP) agreement to which both Vietnam and the US are parties, the Vice Chairman said the local legal system is being aligned with the TPP and the NA will consider approving the trade pact as soon as possible.

He added he hopes the US will also ratify the deal soon to meet the shared economic and political interests of the member nations.

For his part, Alexander C Feldman highly valued the role of Vietnam’s parliament in promoting the local economy, along with the optimal conditions given to the US’s investment and business activities.

He also wanted the NA to ratify the TPP in the near future to generate more opportunities for respective enterprises’ cooperation, thereby fostering the two countries’ overall relations.