Leaders promise optimal conditions for Japanese investors
President Tran Dai Quang and Prime Minister Nguyen Xuan Phuc have hailed contributions made by the Japan Business Federation (Keidanren) to improving the investment climate in Vietnam and advancing the strategic partnership between the two countries across sectors.
Go Back 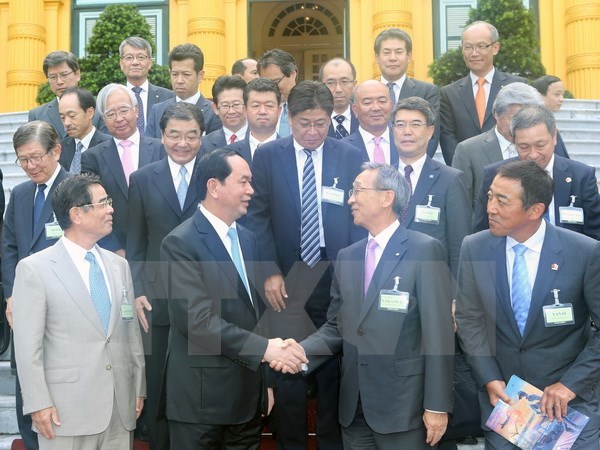 At separate meetings with a working group of the Keidanren’s Japan-Vietnam Economic Committee in Hanoi on August 23, the two leaders appreciated the role played by the committee’s co-Presidents in promoting the bilateral ties, especially in the realisation of the Vietnam-Japan Joint Initiative.

The Vietnamese State always regards Japan as the country’s leading and long-term partner, and wishes to work together with Japan to push forwards the relationship in a more comprehensive and pragmatic fashion, he stressed.

The President suggested the two sides step up their economic ties as they still hold substantial potential for increased cooperation in this field.

The establishment of the ASEAN Community late last year and new-generation trade agreements such as the Trans-Pacific Partnership (TPP) agreement and the Regional Comprehensive Economic Partnership (RCEP) agreement are expected to afford multiple opportunities for the two countries to beef up their economic, trade and investment affiliation, he added.

Both leaders pledged to create a more stable, open and transparent business climate for foreign investors, including those from Japan.

He noted his hope that the Japanese federation will help create big waves of investments in Vietnam and that the Vietnamese Government wishes for cooperation within the framework of the Vietnam-Japan Joint Initiative to enter the next level.

For his part, Kyohei Takahashi and Kuniharu Nakamua, co-Presidents of the Japan-Vietnam Economic Committee, reassured that Japan always attaches importance to cooperation with Vietnam.

Kyohei Takahashi said trade between the two countries has quadrupled since the Vietnam-Japan Economic Partnership Agreement took effect in 2009. Japan has poured the largest amount of investments in Vietnam among ASEAN member countries, with over 1,500 businesses operating.

A survey conducted by Keidanren last March shows that Vietnam tops the list of countries where Japanese firms intend to invest in the next five to ten years, he noted.

Kuniharu Nakamua said Vietnam has a lot of advantages to attract investment, like geologicalconditions, an abundant and hard-working labour force as well as its engagement in the TPP and RCEP agreements.

He suggested the Vietnamese Government promptly ratify the TPP to bring new economic, trade and investment opportunities to the two countries.

The Japanese working group is in Vietnam to attend a meeting of the Joint Committee of the Vietnam-Japan Joint Initiative to kick-start the sixth phase of the initiative.

The initiative, launched in April 2003 as a result of special cooperation between the two Governments, aims to create an open and transparent business and investment climate in Vietnam through a policy dialogue between Japanese investors and relevant Vietnamese ministries and agencies. It also makes proposals to help competent Vietnamese agencies complete laws and policies.