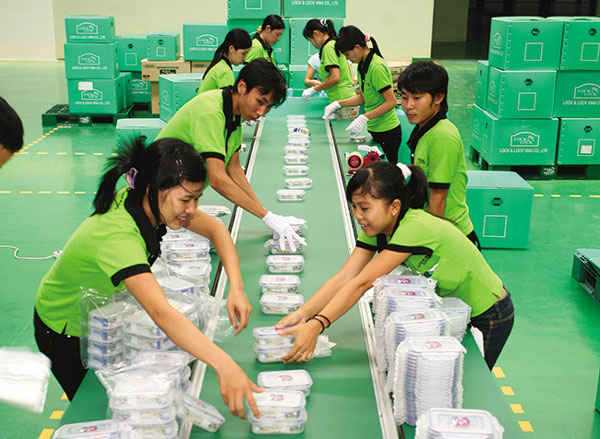 As the demand for plastics looks set to rise, local firms are upscaling to secure their market share — Photo: VIR

In addition to leading plastic firms like Tien Phong Plastics JSC and Binh Minh Plastics JSC, a large number of domestic firms are actively seeking a larger slice of the plastic market. The entrance of new brands like Dekko, HoaSen, and Stroman has heated up an already competitive marketplace.

Tan A Dai Thanh group, known for its stainless steel products, plans to branch out as the market becomes saturated. The group is looking to the plastic industry due to the forecast of plastic products increasing to 45 kilogrammes per capita by 2020. Its facility, Stroman Hung Yen, commenced operations in May with an initial output of 20,000 tonnes per year.

Tan A Dai Thanh will expand its market reach via a distribution network of 20 warehouses in the northern and central regions. In its second phase, the group will inject $70 million to scale up production capacity to 70,000 tonnes per year and open 36 warehouses by 2017.

Director of the firm, Ngyen Van Phuc, said that the new facility had an annual output of 33,000 tonnes in its first phase, building to 132,000 tonnes in the second phase. “The modern production lines imported from Austria and Germany will help us to triple our production capability,” he said.

While the Stroman and Dekko brands are expanding in the northern and central regions of Vietnam, Binh Minh Plastic is ramping up investment in the south through its four facilities in Hung Yen, Ho Chi Minh City, and the southern provinces of Binh Duong and Long An. Last year, the company opened a new factory in Long An, which has a capacity of 5,000 tonnes of plastic fittings a year.

Another producer, Tien Phong Plastic, is also revving up its development drive by expanding its facilities in the northeastern city of Hai Phong, the central province of Nghe An, Binh Duong, and Laos. Last week, a giant HDPE pipe production line was put into service, which marks a step forward in the firm’s operation.

The production line – the largest of its kind in both Vietnam and Asia – is capable of manufacturing HDPE plastic pipes with diameters of up to two metres. The pipes are in great demand for use in key water supply and drainage projects in both domestic and international markets.

Tien Phong Plastic products have occupied over 60 per cent of the northern market share and 29 per cent of the country’s market share. With a consumption output of 71,000 tonnes, the firm earned a revenue of VND3.56 trillion ($160 million) in 2015. In the meantime, Binh Minh Plastics produced 67,875 tonnes and generated VND2.97 trillion ($133.65 million) in revenue last year.

It is rumoured that Tien Phong Plastic and Binh Minh Plastics will be merged as they both have State Capital Investment Corporation (SCIC) and Thailand’s Nawaplastic Industries as main shareholders.

However, Tran Ba Phuc, chairman of the board of directors of Tien Phong Plastic, denied the rumour. He emphasised that the firm aimed to become one of the leading names in Vietnam’s plastic industry in the near future.

Meanwhile, during its recent annual general meeting, Binh Minh Plastics released a plan to lift the foreign ownership limit from 48.99 per cent to 100 per cent.