Local retailers to remain on top
Domestic retailers will continue to lead the market in the coming years, experts have said.
Go Back 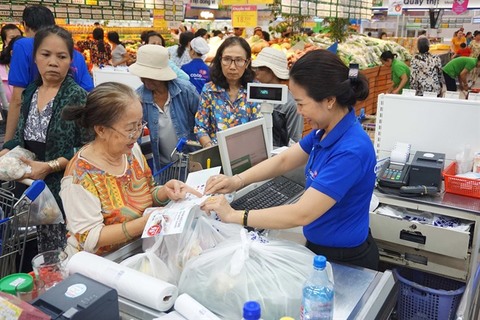 Customers shop at a supermarket in HCM City. Local retailers are expected to remain dominant in Viet Nam.

Speaking at a meeting held by the High Quality Vietnamese Goods Business Association and the Business Studies and Assistance Centre, Pham Hong Son, former sales manager of Unilever Vietnam, said besides understanding local consumers better and easily finding suitable places for stores compared to their foreign rivals, local retailers also had an advantage in day-to-day working since retail usually involved a lot of employees and Vietnamese managers have the edge.

Amid concerns that foreign retailers with their deep pockets will dominate the market, he said many local retailers also had a lot of money and had developed various distribution channels, including supermarkets, minimarts and online shopping.

The rapid growth of the digital economy in the past few years had accelerated the evolution of the retail industry and changed consumers’ shopping behaviours, he said.

Shoppers tended to buy from many channels — online, offline, a combination — and were not loyal to any of them, causing pressure on retailers trying to retain them, he said.

People tend to shop fewer times — reducing from two or three times a week to once a week — but buy more at a time.

Convenience was a major factor now for shoppers, he said.

Consumers based their buying decisions on many factors beyond price, and the need for customer experience to meet or exceed customer expectations was more important than ever, he said.

Developing multiple channels was a key for success in the Vietnamese retail market, but this would be a big challenge for retailers in terms of competence, he said.

The retail market would grow steadily along with the economy in the coming years, he predicted.

According to figures from the Ministry of Industry and Trade, at the end of last year local retailers had an 83 per cent market share.