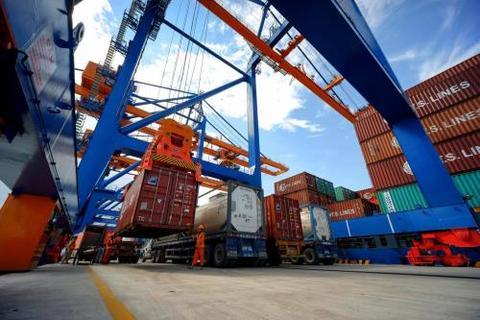 Containers of goods being loaded by a crane system at South Dinh Vu Seaport in the northern port city of Hai Phong. Weak infrastructure has been a persistent obstacle for the logistics sector.

“Viet Nam has the ability to develop its logistics sector thanks to its dynamic import and export activities,” Tran Thanh Hai, deputy director of Import-Export Department under the Ministry of Industry and Trade said. “With its central position in Southeast Asia and more than 3,000 kilometres of coastline, Viet Nam could serve as a stopover destination for shipping firms from other countries in the region and the world.”

He added that the logistics sector in Viet Nam has seen rapid development in recent years with yearly growth rates of 13 to 15 per cent.

“Poor roadway and aviation infrastructure has been one of biggest challenges for the sector despite improvements in recent years,” he said.

In addition, the competitiveness of logistics firms was still weak. According to Viet Nam Logistics Association (VLA), the country has around 4,000 businesses operating in the sector. However, most of them are small- and medium-sized enterprises.

Logistics firms also lack a high-quality workforce because there is inadequate education and training in this space, he said.

VLA’s deputy general secretary Nguyen Tuong said that in addition to completing policies for the sector, ministries should work to improve infrastructure.

Some logistics firms have decided to make big investments in infrastructure to help the sector reach its potential.

For example, Sao Do Group invested in building the South Dinh Vu Industrial Zone (IZ) and Port complex in the northern port city of Hai Phong.

Nguyen Thanh Phuong, the group’s general director, demand for transport services for goods, especially sea transport, has been on the rise in recent years.

The group has been investing in seaports and other infrastructure to meet demand. Its South Dinh Vu complex has a total area of 1,329ha with a seaport and logistics area, a non-tariff area, a petroleum port and a liquid cargo area.

The complex is considered an important part of the logistics chain of the marine economic corridor of Hai Phong – Ha Noi – Quang Ninh. The South Dinh Vu seaport has received some 200 vessels from Japan, South Korea, Singapore, Hong Kong and China with total cargo volume of around 200,000 TEU since it opened last February.

Dinh Duy Linh, general director of Hateco Group, suggested some of the sector’s difficulties could be solved with warehouses that make use of modern technology. Its Hateco logistics centre applies Industry 4.0 technologies to reduce costs.

Piyush Rathore, general director of Transworld QBV ICD Company, said the logistics market in the country’s southern region had been saturated. Meanwhile, the northern market was expected to continue to grow thanks to its favourable location near the Chinese border.