Logistics: serious shortcoming in Vietnam economy
Vietnam has seen a boom in exports and imports with its strong economic growth, but due to weak logistics it has been losing a considerable portion of its wealth.
Go Back 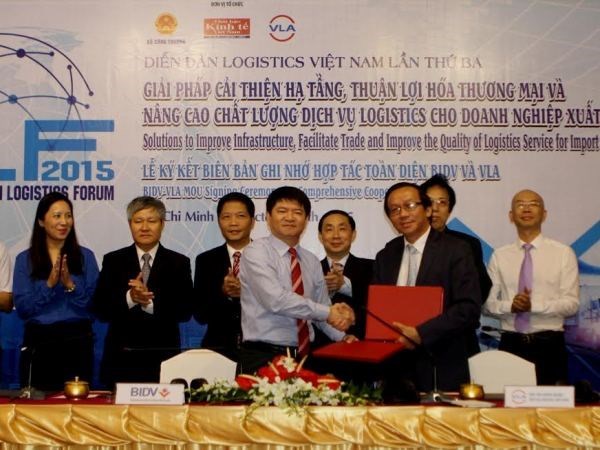 BIDV and VLA signed a MoU on Cooperation at the 2015 Logistics Forum.

At a logistics forum in HCM City on October 16, Deputy Minister of Industry and Trade Tran Tuan Anh said that in past years, logistics costs have taken away between 20 and 25 percent of the country’s gross domestic product (GDP).

Cutting the costs of logistics would boost Vietnam’s international competitiveness.

According to Anh, competition over prices, small or quick-fix business practices and outsourcing to foreign firms are common among Vietnamese logistics companies.

Localities also lack specialised logistics centres. The shares and status of Vietnamese logistics suppliers are very modest. Most logistics activities in Vietnam are taken care of by foreign companies.

The deputy minister said in order to develop logistics services in Vietnam, local logistics companies need to connect with each other, and work closely with export and import companies.

This could help increase the country’s share of sea logistics and goods logistics when Vietnam implements bilateral and multilateral free trade agreements in the near future, as well as open the sector to the World Trade Organisation.

Do Xuan Quang, chairman of the Vietnam Logistics Business Association (VLA), said logistics costs only take away 7 to 10 percent of GDP in developed countries. This rises to between 12 and 25 percent in developing countries.

Up to 72 percent of Vietnamese logistics companies are small- and medium-sized, and only 5 to 7 percent of human resources are properly trained, he added.

Quang also recommended that the Government issue a Law on Logistics; form a co-ordinating committee on national logistics; and boost investment in infrastructure, e-commerce, and the urban retail distribution system. It should also create a logistics major at universities.

According to Quang, the Government should also boost acquisitions and mergers, and encourage the development of overseas logistics networks.

Tran Du Lich, a member of the National Assembly’s Economic Committee, suggested the Government determine the position of the logistics sector in the structure of the economy, keeping the Trans-Pacific Partnership in mind.

Logistics needed to be linked with the planning of sea ports, coastal economic zones and industrial zones, Lich said, adding that Vietnam needs to build a national logistics development programme and use the public-private partnership model to encourage private investment in infrastructure.

Le Phuoc Vu, chairman of Hoa Sen Group board of directors, said the Government needs to create policies to manage the sea port system better, and supervise the collection of shipping fees and additional fees.