Low-cost carriers have bumper crops in Vietnam
Vietjet Air has expanded its domestic carrying market share to 35.7 percent. Jetstar Pacific has also seen the number of passengers increasing rapidly. Low-cost carriers (LCC) are on the rise.
Go Back 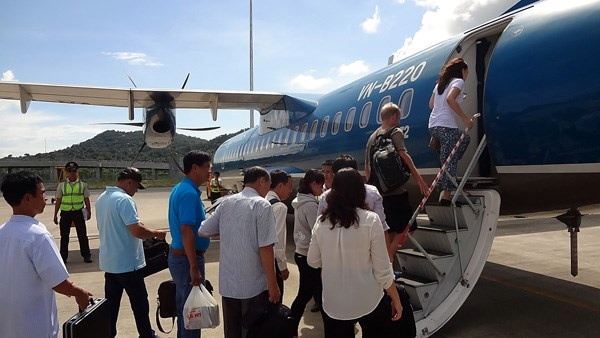 A report of the Civil Aviation Authority of Vietnam (CAAV) showed that in the first 10 months of the year, Vietnamese airlines carried 25.6 million passengers, a very high growth rate of 27 percent.

The sharp increase in the number of passengers on domestic routes has helped Jetstar Pacific, which has been undergoing restructuring in the last three years, made a profit of VND81 billion for the first time after nine years of taking loss.

Meanwhile, Vietjet Air carried 7.4 million passengers, an increase of 66 percent. Its occupancy rate was the highest among domestic carriers, at 88.4 percent.

The figures showed that VNA which has been dominating the market for the last many years, only carried 47.6 percent of total passengers in the first 10 months of the year. Meanwhile, Jetstar Pacific made a strong rise with 15 percent of the market share and Vietjet Air, also an LCC, spurted with 35.7 percent of market share.

Vietnamese airlines, both LCCs and traditional, have spent big money to expand their fleets to prepare for the competition in the market.

Vietnam Airlines has put the latest-generation aircrafts into operation, such as Boeing 787-9, B787 and Airbus A350.

Most recently, Vietjet Air has bought six A321s worth $682 million after it signed a big contract on leasing and purchasing 100 aircrafts last year. The carrier will receive 6-12 new aircrafts every year.

Meanwhile, Jetstar has equipped its fleet with new aircrafts, including two A320s, raising its total number of aircrafts to 11.

CAAV has recently slashed the ceiling airfare by four percent because of the air petrol price decrease. However, air carriers stated their airfares never hit the ceiling. Vietjet Air said its airfares were cut by 27 percent in August and September, while Vietnam Airlines’ airfares were just 70-80 percent of the ceiling level.