Home » Press » Made in Vietnam: Should Samsung be treated as a local company? 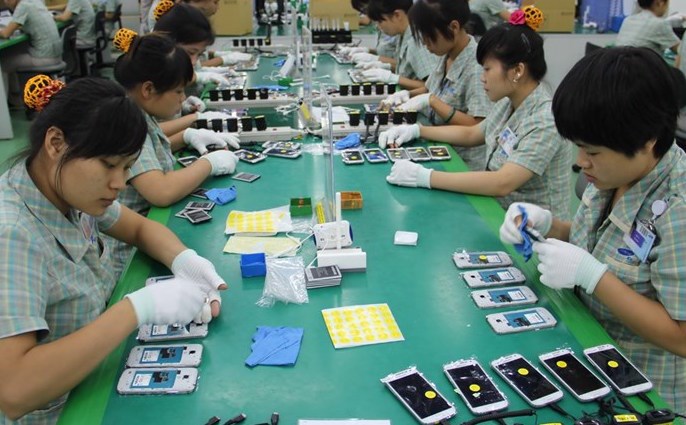 On the sidelines of a conference at the end of July, Samsung Vietnam CEO Myoung-Sup Han told the press that his company hopes to be treated as a local business soon, instead of a foreign investor.

He said every year Samsung makes huge contributions to Vietnam’s export revenues, and creates jobs for hundreds of thousands of Vietnamese, and that all its products are labeled as “made in Vietnam.”

Han’s statement, despite raising a few eyebrows, did not cause any strong controversy, until recently.

During a press conference to promote Vietnamese goods last Wednesday, Vo Van Quyen, who is in charge of domestic market issues at the Ministry of Industry and Trade, seemed to support Han’s view.

Quyen said products made by Samsung, or any other foreign companies in Vietnam, can be categorized as Vietnamese products.

Many local businesses and economists simply do not like that idea. They say the electronics giant, which is now the biggest foreign investor in Vietnam with a total capital of US$11.3 billion, wants to receive the same favorable treatment that the government has given to Vietnamese producers to encourage the consumption of locally made products.

Economist Nguyen Van Ngai said foreign businesses operate in Vietnam should not be considered Vietnamese companies, a common rule that he claimed can be seen in other countries.

Even though foreign investors do contribute to the local economy, through tax payment and job creation, they are not local companies and can leave anytime when they find the business environment no longer favorable, he said.

Some officials want to label goods produced by foreign companies as Vietnamese goods because they want to increase export statistics to “glorify their performance,” Ngai said.

He warned that such mislabeling will affect how policies are made, leading to unhealthy competition between local and foreign businesses.

Vu Kim Hanh, chairwoman of the Association of Vietnamese High Quality Goods, agreed, saying that many Vietnamese businesses are small and need state support, while foreign investors do not.

If all companies are treated the same and given similar incentives, local small enterprises will end up dead, she said.

Trinh Thanh Nhon, CEO of International Cosmetic Company, said foreign businesses have already been offered enough tax incentives, so they should not ask for more.

His company makes household goods such as laundry detergent and toothpaste and has been facing a tough competition from giants, notably P&G and Unilever.

A total of $17.16 billion was registered for both existing and newly-licensed foreign projects in the first nine months, up 53.4 percent from the period last year, it said.

Estimates vary but economists believe the foreign sector is now responsible for around half of the country’s gross domestic product.

Economist Nguyen Minh Phong said ever since Vietnam first opened its economy for foreign investors 25 years ago, the participation of local suppliers in foreign investors’ value chain is “extremely limited.”
It is not right to call their products Vietnamese when almost all the materials and parts are imported, Phong said.
He urged the government to keep supporting local businesses so they can join the value chain of exports, saying it will also help develop Vietnam’s production.

Local manufacturers ague that they have always tried to become suppliers for foreign companies, but it is never easy.

He said his company has for years been a supplier for Skellerup and Molten, both spare part providers contracted by global automakers, but foreign car manufacturers in Vietnam still refuse to buy directly from his company.

Hong did not elaborate. But his comment is in contradiction to what many foreign companies have suggested. Foreign automakers in particular have complained about a lack of qualified suppliers in Vietnam, which force them to pay more to imports parts and components from overseas.

Nguyen Mai is one of very few economists who expressed their support for Samsung’s proposal, saying it will be “progressive” to redefine what makes a company local or foreign.

People should not be too concerned about distinguishing foreign businesses from local ones, considering the huge benefits foreign investors have brought to Vietnam, such as 3.5 million jobs, he said.

Samsung alone is employing 130,000 Vietnamese workers and it reports annual export revenues of $30 billion, Mai said, stressing that Vietnam should be proud that those quality products are made by Vietnamese.

Pham Tat Thang, a senior researcher at the Vietnam Institute for Trade, said since the foreign is part of Vietnam’s economy, their products are essentially Vietnamese.

Some refuse to take a stand in this debate.

Vo Tri Thanh, deputy chief of the Central Institute for Economic Management, said the government should think carefully about the concept of fairness in a global context.

Policies should not be about labeling, he said.

What’s important is how much a business can bring to the economy, Thanh said.