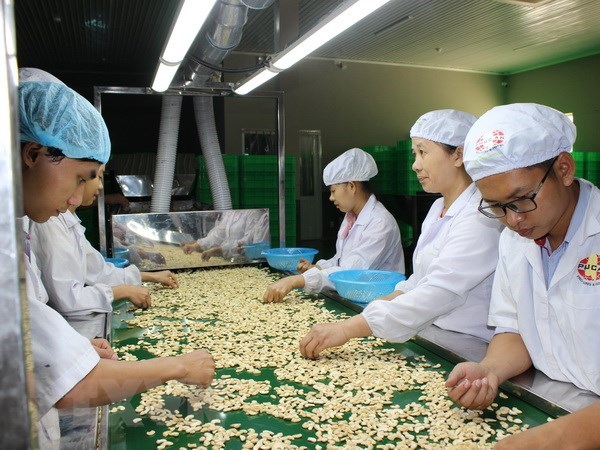 In the Mekong Delta province of Long An, only 12 out of 33 cashew nut processing factories are operating while in Binh Phuoc, up to 80 percent of small and medium-sized enterprises temporarily shut down.

Vinacas Vice President and Secretary General Dang Hoang Giang said imported cashew nut materials hit 25,000 tonnes in May, much lower than 150,000 tonnes in the same period last year, adding that the sector will strive to raise total exports to over 3.7 billion USD in 2018.

Five-month cashew nut exports increased in both volume and value, reaching 141,000 tonnes worth 1.39 billion USD, up 21.4 percent and 25.3 percent, respectively.

Major importers include the US, accounting for 29 percent; the Netherlands, 17 percent; and China, 15 percent. This year, Vietnam plans to maintain a market share of around 65 percent of the global cashew nut export worth 5.7 billion USD.

It is the 13th consecutive year the Vietnamese cashew nut sector has retained its top world place in terms of cashew nut export and processing.

Vinacas forecast that the Vietnamese cashew nut sector will enter a new development phase in 2019. It pledged to continue partnering with farmers and firms to facilitate production and trade by chain value, enhance inspection over origin of products from farm to table, towards raising the sector’s total trade to roughly 4 billion USD next year.

In the afternoon the same day, Vinacas announced the schedule of the 10th Vietnam International Cashew Conference slated for October 5-7 in Ha Long city, the northern province of Quang Ninh. It is expected to attract about 500 domestic and foreign firms from 50 countries and territories worldwide.