Masan Beverage to buy into mineral water firm
Masan Beverage has signed an agreement to become the strategic partner of Quang Ninh Natural Mineral Water Limited Company, according to a press release from Masan Group on Monday.
Go Back 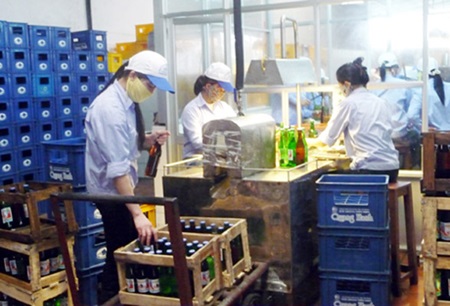 According to the agreement, Masan Beverage, a subsidiary of Masan Consumer Holdings in the Masan Group, will buy 5.2 million shares, equal to 65 per cent of Quang Ninh Natural Mineral Water Co Ltd.

Masan Group is a conglomerate based in HCM City with interests in food, banking and mining.

Masan Beverage will negotiate the share price with the Quang Ninh Natural Mineral Water Company based on the offering price of VND11,100 when the Quang Ninh’s beverage company organises its intial public offering (IPO).

The company’s IPO will be held on December 2. Masan Group also committed that it would not sell its stake within five years after the IPO.

At the moment, Masan has charter capital of VND1.68 trillion (US$74.7 million) and has already acquired 64 per cent of Vinh Hao Mineral Water Company and 53 per cent of Vinacafe Bien Hoa – two of the biggest beverage firms in Viet Nam.

The northern-based mineral water producer has charter capital of VND80 billion ($3.55 million) and is expected to earn VND370 billion ($16.4 million), four times the figure in 2010.

After the IPO, the Quang Ninh Province Mineral Water Company will hold 10 per cent of the company while employees hold 20 per cent, the labour union holds 3 per cent and other investors hold 2 per cent.