McKinsey report: Vietnam among economic outperformers
Vietnam is classified as one of the outperformers among emerging economies, according to a report of McKinsey Global Institute (MGI).
Go Back 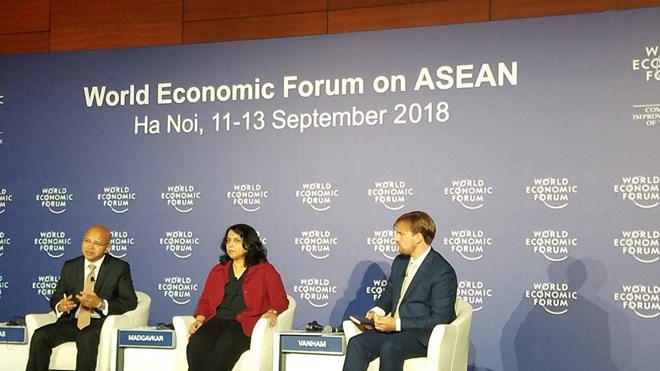 McKinsey report is launched at a media briefing in Hanoi

The report entitled “Outperformers: High-growth emerging economies and the companies that propel them” was launched on September 12 as part of activities in the framework of the ongoing 27th World Economic Forum on ASEAN in Hanoi.

The report identifies the emerging economies which have achieved a track record of stronger and more consistent growth than their peers and examines key factors determining their outperformance.

Of the 71 major emerging economies the report analyzes, 18 economies – about one in four – are classified as “outperformers”.

Vietnam is listed among the 11 economies that grew at a faster pace for a shorter period – 5 percent annually in the 20 years from 1996 to 2016. They are Azerbaijan, Belarus, Cambodia, Ethiopia, India, Kazakhstan, Laos, Myanmar, Turkmenistan, Uzbekistan and Vietnam.

Seven achieved more than 3.5 percent per capita GDP growth over 50 years, between 1965 and 2016. They included China, Indonesia, Malaysia, Singapore, the Republic of Korea and Thailand.

The report pointed out fundamental elements the outperformers tend to have in common, including pro-growth policy agenda and the outsized role of large companies in driving productivity and growth.

A pro-growth policy agenda creates a virtuous cycle of productivity, income, and demand and which encourages savings, ensures stability, and fosters competition and innovation, the report said.

According to the report, the 18 outperformers have almost twice as many large firms (defined as publicly listed ones with annual revenue over 500 million USD) as other developing countries, adjusted for the size of the economies.

They have lifted about one billion people out of extreme poverty since 1990, helping to meet an emblematic United Nations Sustainable Development Goal.

“Development economists have studied and written a lot about policies that have driven growth in emerging economies, and of course good policy is a must,” said Jonathan Woetzel, a director of the McKinsey Global Institute who is also a McKinsey & Company senior partner in Shanghai, the report’s lead author.

“But one of the insights of our research is that highly competitive businesses have also played a critical role in propelling GDP growth—a role that is too often overlooked.”

“Decoding the combination of productivity-enhancing policies and the competitive dynamics in these outperforming emerging economies provides lessons for all countries, emerging economies and advanced economies alike, at a time when productivity growth globally has waned,” said James Manyika, chairman of the McKinsey Global Institute and a McKinsey senior partner in San Francisco.

Emerging economies have accounted for almost two-thirds of the world’s GDP growth and more than half of new consumption over the past 15 years.

The McKinsey Global Institute (MGI) is the business and economics research arm of McKinsey & Company. It was established in 1990 to develop a deeper understanding of the evolving global economy.

The Lauder Institute at the University of Pennsylvania ranked MGI the Number 1 private sector think tank in the world in its 2017 Global Go To Think Tank Index.