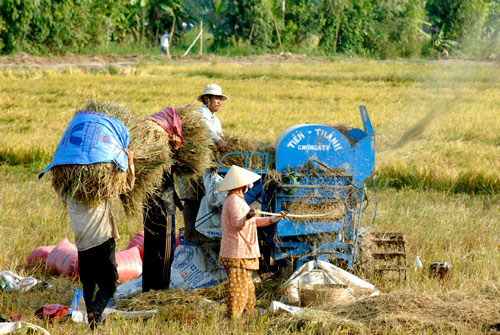 According to the Vietnam Chamber of Commerce and Industry (VCCI) Can Tho Branch, the Mekong River Delta in the first six months of 2016 attracted 79 new projects with total registered capital of $987 million, while 51 operational projects have registered to increase capital by $412 million.

With $1.4 billion worth of registered capital in the first half of the year, the Mekong Delta, for the first time in 20 years, saw a sharp increase in FDI and attracted huge capital.

The investors are mostly from Asia who inject money into farm produce processing, textile & garment, and wind power, according to Nguyen Phuong Lam from VCCI Can Tho.

Most of the large-scale projects are in footwear and garment, including the South Korean invested sports shoes in Can Tho City ($171 million), Taiwanese Kintpassion in Long An province ($68.4 million) and another shoemaking project in Long An worth $25 million.

Meanwhile, there was only one project in agriculture, capitalized at $68,000 registered by a Japanese investor.

In Can Tho City, considered the ‘metropolis’ of the Mekong Delta, only three high-technology agriculture projects have started over many years with total investment capital of $44.1 million.

Nguyen Ngoc He, director of the Can Tho City Department of Agriculture and Rural Development, admitted that the city had called for investment into agriculture projects in the last two years, but the achievements remained very modest.

“Some investors came to learn about opportunities and left. Most recently, an investor from Iran came to see us, but has not made any decision. We visited Israel to call for investment, but there has been no reply,” he said.

He said that investors hesitated to invest in agriculture because agricultural production depends heavily on the weather, while farm produce prices are unstable.

According to Prof Vo Tong Xuan, the Vietnamese leading rice expert, 20 years ago, an American investor came to Vietnam and cooperated with Vinafood to set up a rice processing factory for export.

The factory, located in Tra Noc Industrial Zone in Can Tho City, used the most advanced technology and cooperated with farmers to grow rice in an area of 4,000 hectares.

However, the investor later decided to leave because it did not receive necessary support from local authorities.