Mekong Delta’s life depends on upstream waters
Scientists have warned that the serious drought is just the ‘overture’ for a succession of blows that natural calamities and human activities will have on the Mekong Delta.
Go Back 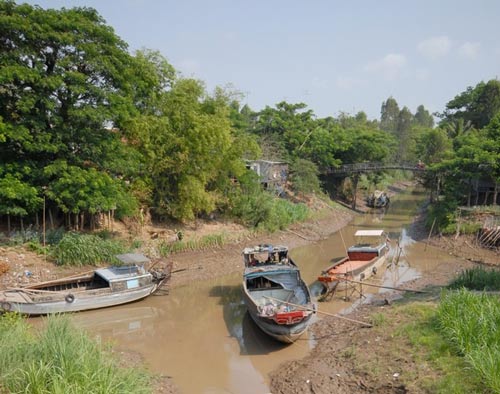 Scientists have warned that the serious drought is just the ‘overture’ for a succession of blows that natural calamities and human activities will have on the Mekong Delta.

Mekong Delta’s people had never before worried that they would lack water one day. But this has happened: the region is, for the first time in the last 100 years, suffering from serious drought.

According to Ky Quang Vinh, chief secretariat of the Can Tho Climate Change Office, 90 percent of the water volume for Mekong Delta comes in rainy season, while only 10 percent comes in dry season. That is why the delta sees the saltwater intrusion every year.

China only provides 16 percent of total water volume, however, in dry season, Mekong’s water mostly comes from the country. Therefore, if China stores water in its reservoirs in the upstream and only discharges water to serve its purposes, Mekong Delta would bear more serious saline intrusion.

Meanwhile, Nguyen Huu Thien, an expert on wetlands, said he was worried about the ‘impending dangers’ – the 11 hydropower projects Laos and Cambodia plan to build.

Eighty two percent of Mekong’s water volume is from the river branches and the rains from Laos border areas. In favorable conditions, water would only arrive in Vietnam’s Mekong Delta after 1.5 months after it goes through the 11 hydropower dams.

Thien also warned that the 11 hydropower dams are developed by different investors; therefore, it would be very difficult to get information and learn about their operation laws. This may cause a fresh-salt water disturbance which would upset the daily life and agriculture production activities.

However, Thien, believes that the adverse effects on the water sources would not be the biggest danger. He is more worried about the disintegration of the Mekong Delta.

Mekong Delta is a young delta – 6 million years old – and it has taken shape thanks to the process of alluvium consolidation. It is also the alluvium lying in the coastal areas which hold back the sea waves and prevent the delta from being inundated.

Le Phat Quoi from the HCM City Environment and Natural Resources Institute also noted that Mekong’s alluvium plays a vital role in the existence of Vietnam’s Mekong Delta, warning that the delta would be ‘in danger’ if it cannot receive more alluvium.