Monetary market experiencing tough days
The monetary market on the last days of the year was hot, with the interbank interest rate reaching the year’s peak and the dollar price hitting the ceiling. The watchdog agency had to pump a large amount of money into circulation.
Go Back 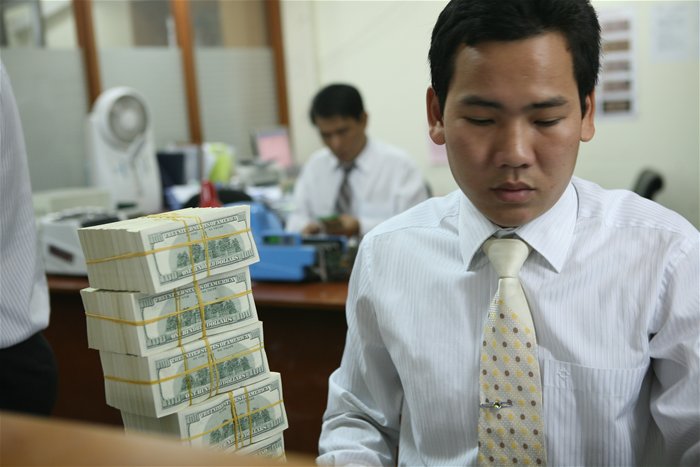 The liquidity of the banking system is short as the demand for payment is on the rise at the end of the year. This can be seen in the overnight and one-week interbank interest rate which has been increasing steadily this month.

On December 22, the interbank interest rate hovered around 5 percent per annum. One-week, 2-week and 1-month interest rates have increased by 0.05 percent over the last week to approximately 5 percent. These are the highest interest rates this year.

The capital offered to lend in the market has shrunk because banks all want to ‘take up a defensive position’ for three reasons. First, they need money to finalize documents. Second, they need money to pay depositors and businesses. And third, they need to be on the watch for the dollar price increase.

Analysts believe that the interbank interest rates would be kept high at over 5 percent for all types of loans.

Meanwhile, the dong/dollar exchange rate rates quoted by commercial banks nearly hit the ceiling. On the black market, the dollar was traded at VND22,880 per dollar on December 22, the highest level this year.

The State Bank of Vietnam (SBV) last week had to pump a large amount of 14-day capital worth VND12.439 trillion. Of this amount, VND7.232 trillion reached maturity within the week. As such, the net amount of money it has pumped into circulation was VND5.207 trillion, according to Bao Viet Securities.

This was the fourth consecutive week the central bank pumped money into circulation. The amount reached VND74 trillion just in the first half of the month.

Analysts said the factors which have put pressure on the monetary market were foreseeable: the US dollar is appreciating, the demand for dollar is increasing towards the year end and the weaker Chinese yuan, the currency of Vietnam’s biggest trade partner. Besides, banks’ capital has fallen due to money used for credit.

This is an ‘unexpected move’ because it was contrary to the growing global tendency as the US dollar interest rate has increased in both US and Asian markets.