Multi-national groups fleeing from China, heading for Vietnam
Samsung, LG and Intel have injected more money into Vietnam. Some multinational conglomerates are considering relocating their global production bases to Vietnam. Others are planning to set up factories in Vietnam.
Go Back 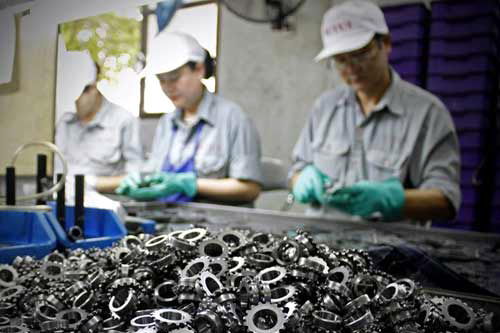 In early August 2015, Samsung Vietnam unexpectedly announced the project on expanding its factory in Bac Ninh province worth $3 billion. The move will raise the South Korean investor’s total investment in the ‘tech town’ of Bac Ninh to $7.5 billion.

As such, with two production complexes in Bac Ninh and Thai Nguyen provinces, Vietnam now acts as Samsung’s largest production base in the globe, where 30 percent of the group’s mobile phones are made.

The Wall Street Journal has reported that foreign textile and garment investors have been flocking to Vietnam to set up factories where they hope they can take full advantage of the Trans Pacific Partnership (TPP), and a local cheap and young labor force. Nam Dinh, Ha Nam and Hung Yen have been eyed by foreign investors as their investment destinations.

Huyndai, LG, Intel, Nokia – Microsoft, Canon, Sony, Posco, Doosan and Kumho Asiana all have poured big capital into their projects in Vietnam, while some are considering relocating their global production bases to Vietnam.

In March 2015, LG spent $1.5 billion on a new factory in Hai Phong City which specializes in assembling TVs, mobile phones, washing machines and air conditioners which will be provided to the global market.

Intel last May decided to relocate some links of its production chain from Kulim in Malaysia to HCM City, Vietnam and China in an effort to cut labor costs.

Most of the US and Japanese large electronics manufacturers are located in Vietnam, which gives Vietnam another incentive to strive to the Number 1 position in South East Asia’s electronics industry.

The Financial Times, in an article published recently, commented that Vietnam is gradually replacing China as the world’s factory, becoming a rising star in emerging markets.

Phap Luat Viet Nam has quoted experts as saying that Vietnam now has natural and socially favorable conditions to become the world’s new manufacturing center in the next 20 years.

Deputy Governor of the State Bank Nguyen Kim Anh noted the investment wave shift showed that China can no longer work as the world’s factory.

Japan’s outward investment has been heading for Vietnam with 60 percent of surveyed Japanese enterprises planning to make investment in Vietnam in 2015 and upcoming years.