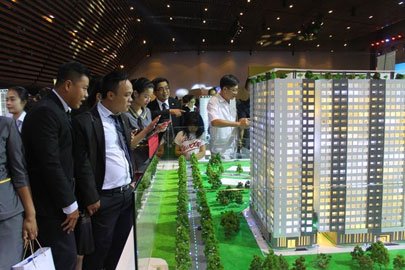 Customers inspect a Novaland property project in HCMC in this file photo. HCMC-based property firm Novaland and its local partner have won approval to develop an urban area on reclaimed land in Danang City

Phan Thanh Huy, general director of Novaland, told the local news siteVnExpress that Novaland and Danang-based North-South 79 Co will join hands to develop the 182-hectare Da Phuoc urban area project, which is planned to be renamed as Sunrise Bay.

Da Phuoc urban area, or D-City project, got off the ground in February 2008 in Hai Chau District of Danang with total capital of US$250 million. D-City was then considered the largest foreign direct investment (FDI) in Danang.

As originally planned, infrastructure development of the project would be completed in 15 months, the main items would be put in use after 24 to 36 months and construction would be finished within 10 years. However, the project has been put on hold and its size has been scaled down to 182 hectares as a result of the impact of stagnation on the local property market and the global economic downturn.

Huy said Novaland would revise the project plan under the current circumstances. Functional areas of the complex will include hotels, a commercial-conference center, a school and housing, among others. Priority will be given to low-rise buildings at the project such as villas, townhouses and a resort. The project is scheduled for implementation until 2019.

Huy said this is Novaland’s first project in the central region, marking its first foray into property projects outside HCMC.