Opportunities for local support industry firms
A few years ago, Samsung, a world-leading electronics company, encouraged local Vietnamese firms to produce spare parts for its factories. However, the firm struggled to find Vietnamese suppliers capable of making simple components like screws, chargers and keyboards to adequate standards.
Go Back 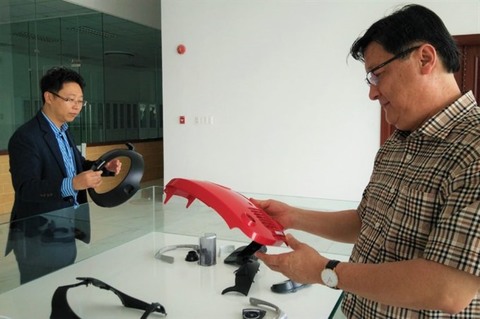 This sparked concern about the country’s support industry being unable to meet Samsung’s strict requirements, even for the simplest components.

But difficulties are also opportunities for those who are awake and many businesses and investors bet on the support industry, especially after the Government issued many preferential policies and investment incentives.

Notably, the Samsung’s localisation rate is now at 58 per cent.

The PM said Viet Nam aimed to have highly competitive support industry products by 2020, meeting 45 per cent of necessary demand for production and local consumption.

Some domestic manufacturers have taken the bull by the horns and are determined to become suppliers of multinational groups in Viet Nam.

Chau Ba Long, general director of Minh Nguyen Support Industry Joint Stock Company in HCM City, one of Samsung’s tier-1 suppliers, said his company was established with a determination to become one of leading part suppliers as well as a trusted brand in the region.

“One of the reasons for our success was human resources. The company in recent years spent much employing high quality workers and foreign experts with long-term experience at multinational groups to ensure sustainable development,” Long said.

“Some successful companies decided to invest and pursue their goals as Samsung has always been open for all Vietnamese firms to join in their global supply chain. The common characteristics of Samsung’s tier-1 suppliers were being ready to invest in improving their production and human resources,” Binh added.

A Samsung representative said at present, Samsung Electronics has nine mobile phone factories worldwide, with Samsung Viet Nam the largest and most modern, contributing half of its total production worldwide.

He said to maintain such a large-scale production system, Samsung needs the support of its network of suppliers. Currently, 35 Vietnamese enterprises are tier-1 suppliers. The total number of Vietnamese suppliers was 190 enterprises participating in Samsung product supply chain.

“Our principle is very simple. Samsung is actively seeking and co-operating with competitive businesses regardless of country or corporation,” the representative added.

Minister of Industry and Trade Tran Tuan Anh said in addition to support policies for the industry, the ministry would clarify some key sectors which should be prioritised to bring breakthrough developments. Some sectors which Viet Nam has potential include electronics, automobile, garment and textile, leather shoes and energy.

Anh said the ministry had asked the Prime Minister’s petition to establish research and development centres for the support industry.

However, Pham Manh Thang, a specialist in improving productivity, said many Vietnamese firms in the support industry have been not active in joining global supply chains.

Statistics from the ministry showed that Viet Nam now has some 1,800 part suppliers. However, only 300 firms are in the supply chains of multinational groups.

On the other hand, Vietnamese spare part producers are set to face fierce competition from China, Thailand and Indonesia when tariff barriers are removed.

“Being in a flat playground, we need to look outside, because not everyone comes to your house. I have a chance, you also have a chance,” Thang said, adding: “If Indonesian, Thai and Chinese export firms overtake domestic enterprises, we should blame ourselves because their costs are much lower.”

From the angle of businesses, Binh said local firms should have long-term strategies.

“We took Vietnamese firms to the EU and Japan to seek for partners and all had orders. Small companies which can’t do big things should do their job well. If they can do big things, their orders will increase,” she said.