Pharma companies report major declines in profits
Despite positive forecasts, the business performance of Vietnam’s largest drug-makers went downhill in the first half of 2018, heralding challenges ahead.
Go Back 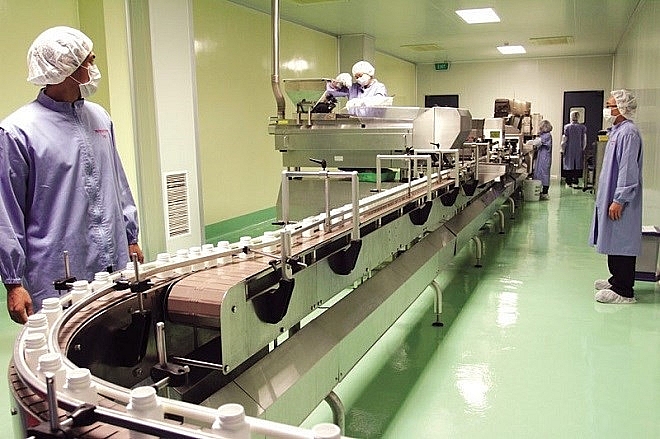 At TRA, the second-largest publicly traded drug-maker in Vietnam, net revenues fell by 7 per cent on-year to VND798 billion ($35.3 million), while net profits were down 48.6 per cent to VND56 billion ($2.47 million), making it the first negative growth in profits for the company since 2014. TRA has State Capital Investment Corporation (SCIC), Magbi Fund Ltd., and Super Delta Pte. Ltd. as major shareholders, holding 35.67, 24.99, and 15.12 per cent, respectively.

Other reasons include significant hikes in selling expenses and management costs, and a strong decline in gross profit margins, partly because of accumulated expenses for the new factory and an increase in input material prices.

The biggest publicly traded drug-maker, DHG, faced the same situation, as it made a net profit of VND310 billion ($13.7 million) during the six-month span, down 13.9 per cent on-year. It is said that strong increases in tax payments, advertisement fees, and labour costs affected DHG’s profit. Currently, SCIC is DHG’s largest shareholder with 43.31 per cent, followed by Taisho Pharmaceutical Holdings, one of the five largest pharmaceutical firms in Japan, with 32 per cent.

Between January and June, DCL – a famous brand in the local pharmaceutical industry – saw an on-year decrease of 78 per cent in net profit to VND9 billion ($398,230).

The company, which has Rhinos Vietnam Convertible Bond Private Investment Fund, managed by Rhinos Asset Management, as its largest foreign stakeholder with 25 per cent, blamed its on-year profit reduction on increases in selling expenses, financial costs and input material prices, and production costs.

It is worth noting that TRA, DHG, and DCL were also among the seven drug makers that saw a hefty fall in gross profit margins in the second quarter of 2018, with DCL taking the lead with a drop from a margin of 33 per cent in the second quarter of 2017 to 26 per cent. TRA and DMC followed, both reporting a decline of 12 per cent. Pymepharco (PME), DHG, and OPC Pharmaceutical JSC saw an on-year decline of 5 per cent on average.

The poor business results have proven forecasts made earlier this year not quite accurate, as researchers and experts all projected that the pharmaceutical industry would grow strongly this year and in the long term. It is easy to understand why these projections were made, however. Vietnam boasts a young population in a developing country, where an increase in diseases caused by environmental pollution remains a major issue, while healthcare spending per capita remains much lower than in other regional countries.

What is more, the Vietnamese government’s supporting policies for domestic production are expected to create a driving force for local producers who have factories meeting PIC/S and GMP-EU standards.

Amid stiffening competition from multinational corporations and new domestic rivals, the giant drug-makers now give priority to researching new drugs to increase their competitiveness. According to Vietnam Report’s December 2017 survey of local pharmaceutical companies, 83 per cent of those surveyed ranked the research of new drugs as their main strategy in 2018.

Recent moves by DHG, Imexpharm, TRA, DMC, and Central Pharmaceutical JSC No.3 have seemingly confirmed this trend, as spending on research and development topped their total expenditures.

TRA’s new high-tech factory became operational in early 2018, creating high hopes for it to become the prime drug producer in Vietnam by 2020, with market capitalisation of VND10 trillion ($454.5 million), revenue of VND4 trillion ($181.8 million), and a distribution network of 40 branches nationwide by 2020.

In a related move, IMP is developing two new high-tech factories, with one scheduled to be put into operation in late 2018 and the other to open in late 2019. The two new facilities will enable IMP to increase revenue by 15-28 per cent and profit by 12-15 per cent, on average, in 2017-2021. “The trend will enable pharma firms to venture further into the profitable segment of ethical – or prescription – drugs, which is currently dominated by multinational corporations, to cash in on the favourable conditions created in the Law on Pharmacy 2016,” an analyst at BIDV Securities told VIR.

With poor performance in the first half of this year and mounting competition, the road ahead for Vietnamese drug-makers is now a difficult one. At present, TRA is making necessary changes to overcome the situation. Rong Viet Securities forecast that the company’s performance would improve in the second half of the year. However, profit margins may not reach the level of 2017, as TRA is expanding its Western medicine segment, which often has lower profit margins than traditional medicine.

Industry insiders said TRA and others would face a lot of challenges in trying to meet their future development targets, as multinationals and new domestic rivals are also expanding rapidly in the country.

Recent moves from DHG are obvious evidence. It has decided to reduce its annual growth targets during 2018-2020 to 13 per cent in revenue and 7 per cent in profit. DHG’s previous annual revenue growth target was 15 per cent.