Pharmaceuticals stay on course for stronger year-end
Despite some jitters, the business performance of Vietnam’s largest drugmakers took an uphill route in the first three quarters of 2018, with exports set to become a priority focus for many in the near future.
Go Back 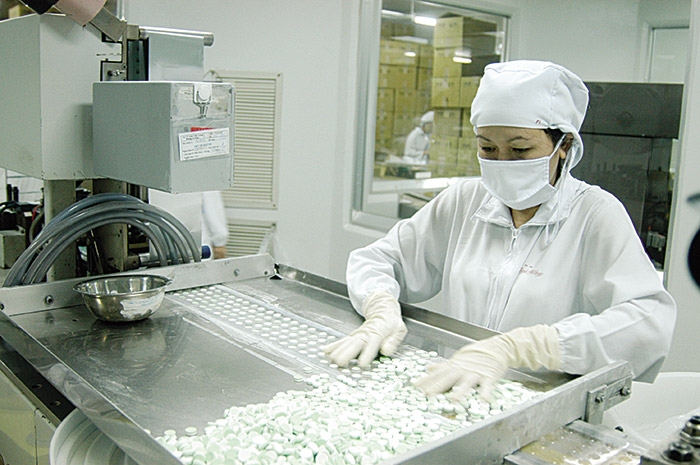 Not all Vietnamese drug companies target overseas markets, but those that scrap the foreign ownership limit tend to go international more often than not

“We plan to complete the portfolio of EU-GMP-standardised products to increase the contribution of ethical drugs to the total revenue, while locating partners to boost exports,” Nguyen Quoc Dinh, chairman of IMP’s board of directors, told VIR.

“To ease over-the-counter (OTC) pressures, we aim to increase the contribution of ethical drugs to 40% by 2020, while decreasing that of OTC revenue to 50%, while reserving 10% for exports,” he added.

However, not all leading Vietnamese drugmakers target the international market.

Traphaco (TRA), the second-largest publicly-traded drugmaker in the country, is a typical example. The firm aims to become the No.1 drug producer in Vietnam by 2020, with market capitalisation of VND10 trillion (US$434.8 million), revenue of VND4 trillion (US$173.9 million), and a distribution network of 40 branches nationwide.

“We are co-operating with partners to boost the distribution of imported pharmaceuticals. We do not have plans to export now,” a representative from TRA told VIR.

It is clear why TRA targets the domestic market rather than going international. Currently, the OTC market segment of TRA is on a growing path, while the ethical drugs segment is improving with new products meeting the PIC or GMP-EU standards of the new factory, thus enabling the firm to win bids.

According to industry insiders, the drugmakers which scrap foreign ownership limits (FOLs) have a higher tendency to go international than others. Moves by the biggest publicly-traded drugmaker Hau Giang Pharmaceutical JSC (DHG), and the third-biggest Domesco (DMC) seem to confirm the fact.

DHG, with a 32% stake owned by Taisho Pharmaceutical Holdings, one of the largest pharmaceutical firms in Japan, is now attempting to upgrade its lines to boost exports, thus enabling it to reach an export revenue of US$5 million by 2020.

DHG has completed the upgrading of effervescent line Hapacol with the support of Taisho. As expected, the line will be granted with PIC/S standards in Malaysia in December, thus enabling DHG to export Hapacol to the market. The firm also plans to upgrade production lines of strategic products to Japanese PMDA standards and EU PIC/S standards.

Export channels can partly add money to DHG’s revenues at least in the short-term, when the scrapping of the FOL creates a negative impact on business performance. The FOL removal forces the drugmaker to give up some business lines, including sale of goods manufactured by other units, and a packing business.

As shown in the third-quarter financial statement, DHG’s consolidated net profit is down 9.9% on-year, while consolidated net revenues fell by 1.49% between January and September, partly because of the suspension of sales of MSD and Eugica products in line with the FOL removal.

In similar moves, DMC is expanding to venture further into international markets. Now, export is a part of its revenues. In the third quarter of this year, export revenue was VND2.35 billion (US$102,170), thus raising the total figure in the first three quarters to VND5.2 billion (US$226,100), and contributing to revenue improvement.

Currently DMC, which has Abbott Laboratories, one of the world’s leading nutrition groups, as the biggest foreign shareholder (51.7%), exports to 12 markets including Japan, South Korea, the Philippines, and Hong Kong.

Recovery trend TRA, DMC, and IMP have announced their three-quarter financial statements with positive results after posting poor performances over the first half.

“This period marks the second year of our new factory operation, with business indexes meeting yearly targets and many new products with high prospects. This is a highlight of our nine-month business,” said the TRA representative.

At present, TRA has become the nation’s second-biggest provider in the OTC channel, just behind Sanofi.

IMP attributed the improvement to the market expansion and a rise in sales of IMP-made products.