Pizza 4Ps Opens Sleek New Hanoi Location
Hanoians will soon have reason to rejoice, as Pizza 4Ps opens a brand-new location in the capital.
Go Back 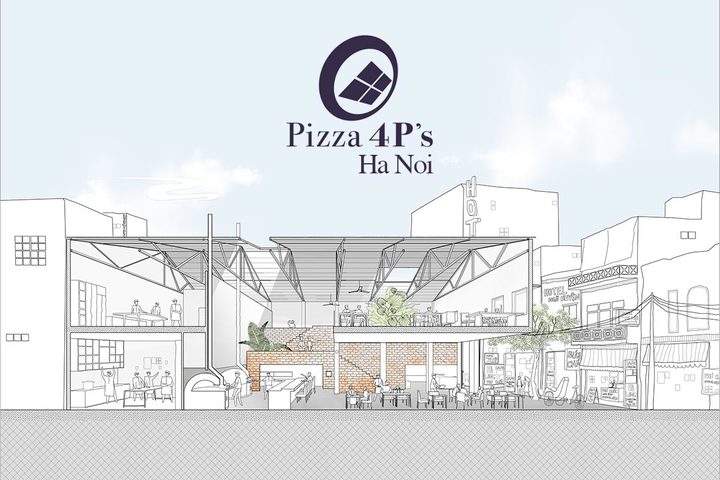 Hanoians will soon have reason to rejoice, as Pizza 4Ps opens a brand-new location in the capital.

Down south, the Japanese-owned pizza joint is something of a local institution. It’s one of the only restaurants in the city where reservations are a must; the dining area is packed from midday through to the evening, and even international media has picked up on the pizza-making outfit’s greatness.

In Hanoi, owner Yosuke Masuko plans to carry on the good name of Pizza 4Ps while also paying homage to the capital’s Old Quarter neighborhood. For his second location, now in its soft opening at 24 Ly Quoc Su, Masuko enlisted architect Shunri Nishizawa to create the perfect space for 4Ps.

The result is a thoughtful combination of old and new. To start, Nishizawa kept the original facade of Hanoi’s 4Ps location, which was once a printing factory. The architect honored the memory of the old structure by featuring over-scaled elements like chimneys and courtyards indoors.

Now that the space is complete, diners are free to enjoy a slice – or a whole pie – on the ground floor. When the restaurant officially opens on November 1, Masuko will open the building’s upstairs mezzanine, which overlooks 4Ps Hanoi’s pizza ovens and also brings patrons eye-level with the original steel trusses of the building. Downstairs, a small tunnel entry – reminiscent of a Hanoi alley – leads people into the restaurant and toward the pizza-making area, where a pair of chimneys extend up into the 11-meter-high void, which is capped by a skylight.

For the moment, Masuko aims to begin with a seating capacity of 50 and scale up from there, however the real challenge, he concedes is quality control. While 4Ps will keep all its same suppliers, the distance from Dalat to Hanoi, for instance, where 4Ps gets their cheese, is much greater than Dalat to Saigon.

Still, there’s no reason not to have high hopes for the pizza-makers. If their Saigon location is any indication, the northern branch will be a roaring success. Enjoy, Hanoi!