Poor decentralization efforts lead to oversupply of teaching graduates
It is estimated that Vietnam would have 41,000 primary school teachers unemployed by that time. The figures would be 12,200 secondary and 16,900 high school teachers. This means that about 70,000 teachers may stay unemployed by 2020.
Go Back 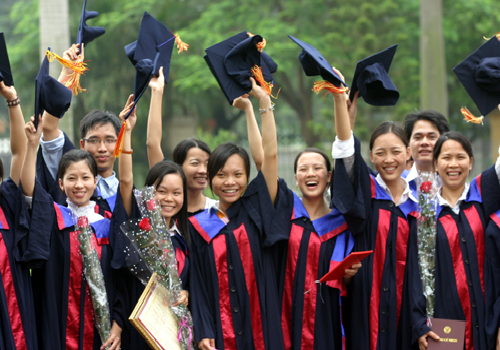 Bui Van Quan, president of Thu Do University, estimates that by 2018, Vietnam would have 19,200 teaching graduates for the primary education level each year.

The figures would be 18,700 for secondary education and 23,000 for higher education.

Vietnam won’t be able to use all the pedagogical graduates by 2020, even if the country succeeds in reducing the ratio of students to teachers to a level equal to that of developed countries.

Tran Xuan Nhi from the Vietnam Association of Universities and Junior Colleges said that the training network had developed too rapidly with many pedagogy schools and faculties opened in recent years.

Nhi, at the meeting with the Ha Tay Pedagogical Junior College in late July said that it was time for pedagogy schools to re-estimate the number of students and schools to re-evaluate enrolment plans and avoid oversupply.

Official reports shows that there is at least one pedagogy school in every city and province, except Dak Nong province.

There are 19 pedagogy training establishment in the northern mountainous and midland provinces, 26 in Red River Delta, 23 in the north and coastal provinces of the central region, eight in the Central Highlands, 18 in the eastern part of the south and 14 in Mekong River Delta.

Nguyen Ngoc Vu, head of the Ministry of Education and Training’s (MOET) Planning & Finance Department, said that in order to ease oversupply, the only choice is to reorganize the pedagogy school network.

Some experts say there should be 30 pedagogy schools for all 63 provinces and cities, or one per 3 million people.

According to Le Viet Khuyen, former deputy director of a MOET programme, in the past, local pedagogy schools were set up with an aim of training teachers for local nursery, primary and secondary schools, while the central schools’ task was to produce teachers for high schools.

However, central schools now are training teachers for schools at different education levels. Therefore, it is necessary to restructure the pedagogy school network.

Khuyen said that training had not been put under strict control in the last 10 years.

“A school in the southernmost part of the country can open training classes in the northern province of Lai Chau,” he said.