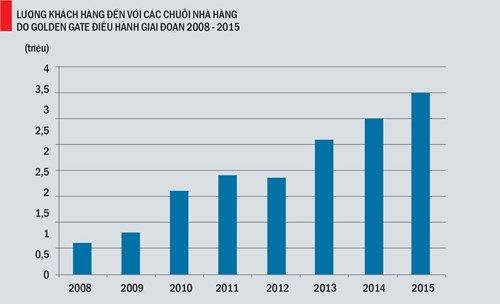 One business deal which attracted a lot of media attention in 2015 was the successful call for capital by Kafe Group.

Investment funds agreed to inject $5.5 million into the restaurant-coffee chain, including Cassia Investment from Hong Kong which has invested in many food & beverage (F&B) chains in Asia.

Kafe Group’s managing director Dao Chi Anh said the company would list shares on London or Hong Kong stock markets in the next two years so as to mobilize more capital from investment funds.

According to Chad Ovel, CEO of Mekong Capital, restaurant chains attract investors because 99 percent of restaurants present now in Vietnam are separated ones, not in chains. There are only several well-known F&B chains (not including franchised ones), run by Nam An Group, Kafe Group, Huy Viet Nam, Golden Gate and TNG Holdings.

He noted that Mekong Enterprise Fund III (MEF III), a new fund managed by Mekong Capital now also pays special attention to the restaurant sector. This explains the presence of a person, who played the major role in the development of 12,000 KFC restaurants, in Mekong Capital’s advisory board.

However, a Mekong Capital’s representative said it is not a simple work to find a feasible project to invest in. Meanwhile, Chad said the expansion rate of the chains must not be higher than 50 percent per annum, because the rapid expansion may damage the whole system.

Johan Nyvene, CEO of the HCM City Securities Company (HSC), also noted that F&B is a sector attractive to financial investors, but there are not many considerable companies in Vietnam, i.e not many opportunities for investors to pour money to.

A report showed that the F&B sector in Vietnam is really bustling now with 540,000 restaurants and shops, which include 430,000 small shops, 7,000 fast-food shops, 22,000 cafes and bars. However, the number of shops developed in chains remains modest.

According to Johan Nyvene from HSC, investors not only need to have large capital, but also have to employ experienced staff with good knowledge about the field. Many investors say they are not confident about the quality of the restaurant staff.

There is also a big difference in the business valuation between investors and the owners of restaurant chains.

Investors not only consider the numbers of customers and the revenue of the chains at certain moments, but they predict the business performance in the future as well and estimate what profits they can expect in 3 or 5 years.