Retail competition intensifies in Vietnam
HANOI -- Competition is heating up in Vietnam's retail market, as deregulation attracts entrants from other sectors and from overseas.
Go Back 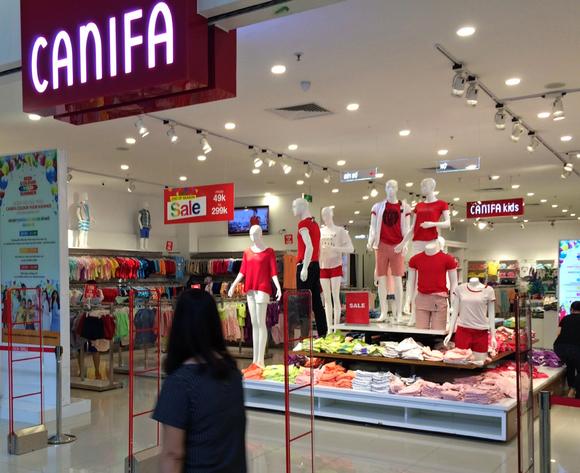 Canifa’s clothing store at the Aeon Mall in Hanoi looks just like a Uniqlo outlet.

In one corner of Hanoi’s Old Quarter, characterized by narrow streets and French colonial architecture, a small shop carries a conspicuous sign reading, “VinMart+ (plus) .” Inside, processed foods, beverages, vegetables, stationery and toys fill up both sides of a narrow aisle. One customer, a 36-year-old company employee, said she likes the shop and visits it every day because she can easily pull over on her motorcycle to make a quick purchase.

The shop is run by Vingroup, a major Vietnamese real estate agency. The company bought a local supermarket in October 2014 to enter the retail industry and began opening VinMart+ convenience stores in the second half of 2015. It now operates 880 stores in Hanoi and Ho Chi Minh City and plans to add 10,000 more by the end of 2019.

Canifa, a clothing manufacturer set up in 2001, began retailing on a full-scale basis in 2014. The interior and product lineup of its outlets are quite similar to those of Uniqlo, a Japanese clothing retailer. Their products, though priced slightly lower than Uniqlo, are relatively expensive for the average Vietnamese consumer. But thanks to a growing middle class, the number of outlets has grown to more than 70.

The retailers are springing up thanks to a relaxation of regulations. In Vietnam, a business wishing to open a retail outlet must undergo a review by the authorities to examine what impact the new business might have on the local economy. However, the criteria used to be unclear, making it difficult for companies to set up retail chains.

Things began to change in 2007, when Vietnam joined the World Trade Organization. Efforts got underway to create transparent markets, and the government relaxed the rules for new businesses. In May this year, the government announced a measure to exempt small shops with a floor space of 500 sq. meters or less from seeking approval. The rule may go into effect by the end of this year.

Vietnam’s growing middle class makes the retail market look increasingly attractive. An industry group estimated that the market probably reached $109.8 billion in 2015, up 2.4 times from five years earlier. The figure is projected to reach $179 billion in 2020.

Foreign companies are also rushing in to grab a share of the market of 93 million people. In 2014, Japan’s Aeon opened its first large shopping mall in Vietnam, in Ho Chi Minh City. It has since added three more in Hanoi and elsewhere in the country, the latest of which opened in July.

The first 7-Eleven convenience store in the Southeast Asian country will be opened by February 2018.

While overseas companies have advantages in terms of capital, shop design and product lineup, local operators are fighting back. Vingroup is taking advantage of its know-how in the real estate business. Chairman Pham Nhat Vuong says it is important to secure good locations before foreign companies come in, and that it is acceptable if 30% of new outlets are unprofitable for some time after opening. The company hopes to draw on its knowledge of local land ownership and development projects.