Retail, services sales hit US$110 bln
The country's total retail sales and services revenue reached US$110 billion, rising 9.8% over the same period last year, or 9.1%, if inflation is excluded.
Go Back 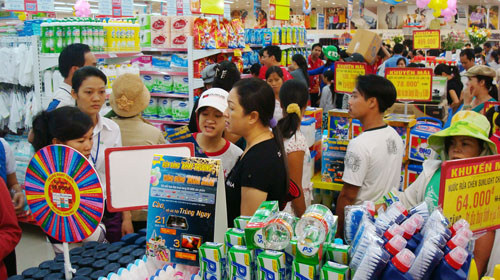 According to the General Statistics Office (GSO), the retail sales of goods and services in September alone is estimated to reach VND270.6 trillion (US$12.27 billion) or 0.6% increased against August.

According to an expert at the GSO, Vu Manh Ha, purchasing power had not changed much as residents spent their money on key consumption products.

Revenues in some sectors saw a handsome increase. Food and foodstuff saw an increase of 15%, household appliances rose 13.2%, garments and textiles up 10.9% and transport services are estimated to increase 8.1%.

In the first nine months, the increase in purchasing power equalled H1 and H2 this year. It was attributed to more purchases of essential goods by residents during the country’s National Day on September 2, and the Autumn Festival on September 27.

Purchasing power was one of the indicators which reflected the macro-economic recoveries in the first nine month of this year.

Meanwhile, according to the GSO , the consumer price index (CPI) in September continued its downward trend from August.