Retailers flee from shopping malls
The high rent for retail premises in large cities, especially HCM City, has forced retailers to give up their business.
Go Back 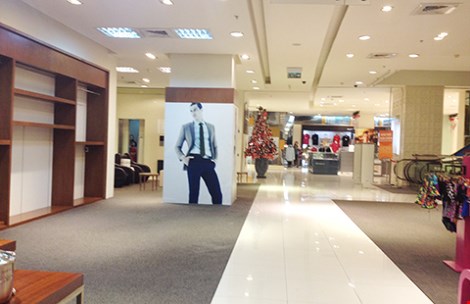 The latest report of Cushman & Wakefield showed that the rent for retail in the central business districts in HCM City is about VND34 million per square meter a year, which is far higher than that in cities like Dubai, Doha, Bangkok and Manila.

Research of CBRE, also a real estate consultancy firm, also showed that retail premises’ rent in HCM City has been increasing most sharply in the region. The rent in the CBD in the third quarter of 2015 climbed to $120 per square meter a month, which is triple that in non-central areas.

It is now the peak year-end sale season, but shopping malls in HCM City, from popular to high-end, have been deserted with a lot of stalls idle. Sellers are seen sitting idle, surfing on the internet to kill time.

M, the owner of a clothes stall at T, a shopping mall for average income earners in district 3, complained she has to pay VND8 million a month in rent, though her stall is hidden from view and very small.

“The rent is very high, while the sales have been going very slowly. I have been taking losses in the last eight months since I moved here and I have to offset the loss with profits from my other business types,” she complained.

High-end shopping malls are facing the same situation. Diamond Plaza, Crescent Mall, Robins, Pearl Plaza and Parkson Flemington are crowded only on weekends or holidays and deserted on ordinary days.

H, who once had a restaurant at the food court area in a shopping mall in district 1, left after one year.

She said she could make a profit of VND10,000 for every ration sold at the restaurant, the same profit she could expect if she opens a street food shop.

Also according to H, investors have to pay VND50 million a month in rent for a 18-20 square meter stall.

An analyst, citing the reports of consultancy firms, noted that the retail shop rent accounts for 30-40 percent of total retail revenue in HCM City, an overly high proportion compared with the 10-12 percent in other regional cities.

Some landlords said the proportion of unoccupied retail premises is low, about 10-20 percent. However, Robert Tran, CEO of Robenny, a consultancy firm, said he thinks the figure could be much higher in reality.