Salaries to rise with GDP growth in Vietnam, survey
The manufacturing industry is one of the three industries that will see the highest salary increase rate for the entire year of 2015.
Go Back 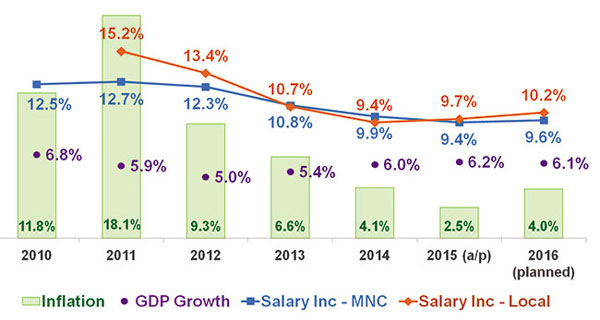 As real wages across Asia increase, Vietnam’s wages, too, have been driven up by high gross domestic product (GDP) growth, which is forecast at 6.5 per cent for 2015 and 6.6 per cent for 2016, a lower inflation rate, growing consumer purchasing power and flow of foreign direct investment (FDI), said Godelieve Kroonenberg, market business leader ASEAN for Mercer’s information solutions business.

“Positive macro-economic prospects, the signing of many free trade agreements (FTA), and the establishment of the ASEAN Economic Community (AEC) will encourage foreign investors, especially those from Asia, to increase their investments and expand business operations in Vietnam’s manufacturing industry. As a result, they will need more labourers and would increase wages to retain them,” she told VIR.

“While many EU firms will shift investments from China to Vietnam, many Japanese, South Korean, and Taiwanese businesses would increase investments in electronics, apparel, and other manufacturing industries to benefit from FTAs,” she attributed.

Echoing Kroonenberg’s view, Hoa Nguyen, director of Mercer Salary Surveys and HR Consulting Services, said the introduction of FTAs would increase the competition that many Vietnamese companies will face and that these firms would need to improve their productivity, their systems, and processes if they were to compete successfully against foreign competitors.

A professional HR and rewards system would definitely help the companies improve their productivity and maximise their workforce so companies will be able to achieve a strategic business growth plan.

Regarding predicted hiring intentions among multi-national companies (MNCs) in Vietnam over the next 12 months, Hoa added that 40 per cent of MNCs are planning to increase headcount through recruitment.

Regarding decisive factors that affect salary increments among MNCs in Vietnam, Hoa disclosed that the company performance, market competitiveness, and inflation were included. She predicted that companies planned to give a slightly higher salary increment for 2016 due to a more optimistic business forecast for 2015-2016.

Earlier, according to a recent survey by the General Statistics Office, the majority of foreign-invested companies in the processing and manufacturing industry are upbeat about business outlook in the last quarter of 2015.

Specifically, those in medicine, pharmacognosis, tobacco, electronics, computing, furniture and paper industries are positive that they will see a rapid rise in new orders and production volume, which would result in a stable and rising trend in labour recruitment.