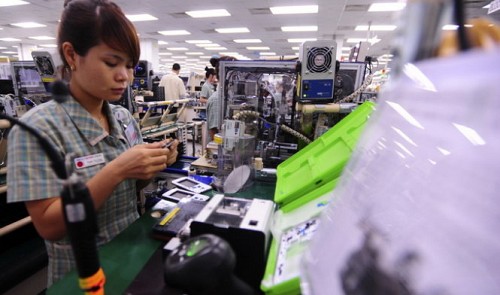 What Samsung, and other foreign-invested firms, manufactures in Vietnamese territory can be considered “made-in-Vietnam” goods, Quyen said, citing what is regulated in a program organized six years ago to promote the use of Vietnamese products and services.

This is what is written in the handbook for the program which states that all products produced and services offered inside Vietnam, except for imports, are Vietnamese products and services, he said.

According to Vietnam’s investment and corporate laws, Vietnamese goods and services are those made or offered by individuals or organizations, no matter whether they are foreign firms, state-run enterprises, cooperatives or small businesses, established for operations in the nation, he added.

At a seminar in July, Han Myoung Sup, CEO of Samsung Vietnam, said his firm did not want to be only associated with the name of a foreign investor and the biggest exporter in Vietnam, but to be known as a national enterprise in the country.

According to technology newswire VnReview, the definition found in the manual for Vietnamese goods and services covers three criteria.

First, they must be produced domestically, which means their production sites must be located in Vietnam.

Second, the value added generated inside the Southeast Asian country by the producers and suppliers of those goods and services must reach a certain rate defined by the competent authorities of Vietnam, depending on each type of business and specific conditions.

Third, the owner of a trademark is a Vietnamese citizen.

Samsung goods never meet these standards to be called “Vietnamese products,” according to the newswire.

The owner of the trademark Samsung is not a Vietnamese citizen, while the value added the Korean firm creates in Vietnam is negligible: in 2014, the company exported US$30 billion worth of goods but the total value of the parts purchased inside the country was only $35 million.

The most significant contribution of Samsung is creating jobs for hundreds of thousands of local workers.

It is not necessary for Samsung to prefer to be treated like a Vietnamese enterprise because the company is enjoying the maximum preferential rates in the exemption or reduction of taxes and fees, according to VnReview.