Seafood exports face problems ahead due to EC’s IUU fishing warning
Although Vietnam has made concrete efforts to fight illegal, unreported, and unregulated (IUU) fishing, the country’s seafood exports will likely face a bumpy ride ahead, said an official on August 23.
Go Back 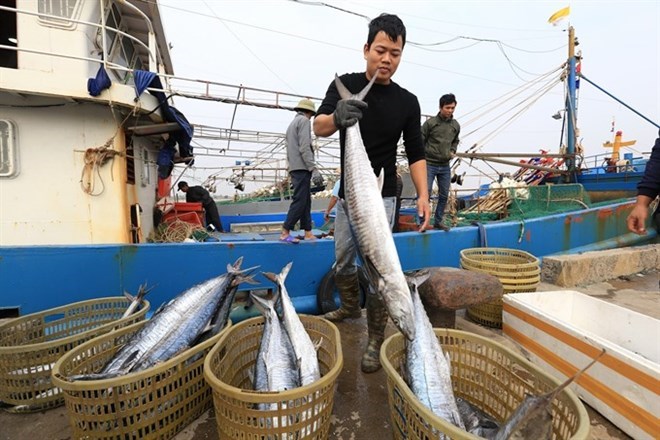 Vietnam has yet to establish an effective management mechanism from central to local levels that enforces policies against IUU fishing, Pham Ngoc Tuan, Deputy Director of the Directorate of Fisheries’ Department of Aquatic Resource Conservation and Development, said at a conference on combating IUU fishing in Vietnam and the business community’s cooperative efforts in Ho Chi Minh City.

Currently, there are no effective measures to detect and prevent Vietnamese fishing boats from encroaching on foreign waters as the small administrative fines for violations do not act as much of a deterrent, he said.

Additionally, the monitoring system does not work effectively enough to control fishing boats’ activities at sea, nor record the species and quantity of fish brought ashore, Tuan noted, adding that the origin verification and legality of Vietnamese aquatic products are also yet to meet European regulations on seafood traceability.

Since the European Commission (EC) issued a “yellow card” warning to Vietnam in October last year, the country’s seafood exports have shown signs of stagnation even though growth was reported, said Le Hang from the Vietnam Association of Seafood Exporters and Producers (VASEP).

The EU is Vietnam’s second largest seafood importer, purchasing 350-400 million USD worth of local seafood annually, accounting for about 16-17 percent of the country’s total seafood export revenue, she noted.

Vietnam saw an increase of 7.4 percent in seafood exports during the first seven months of 2018, with the growth of each export item lower than the same period last year, she explained. For example, exports of tuna from January to July expanded 10 percent, compared to 22 percent in the first seven months of 2017; while shipments of octopus rose by only 6 percent, compared to 52 percent last year.

Hang pointed out that the EC’s yellow card ruling has had direct impact on Vietnam’s seafood exports to the EU market and could even set off a domino effect in other foreign markets.

In the long term, customers from the EU may stop orders from Vietnam and, at the same time, other foreign markets are likely to impose stricter control on yellow card countries like Vietnam, she warned.

Furthermore, during the yellow card warning period, all imported seafood containers from Vietnam can be stuck at customs for inspection from three to four weeks, meaning exporters will have to bear greater costs, not to mention that containers can be sent back to Vietnam, she added.

“It is absolutely a drawback because even though the activities by those boats were not illegal, the arrests have negatively affected Vietnam’s reputation and the EC’s trust in the country. It will be challenging to push for the yellow card withdrawal if the problem of sovereignty on the sea is not solved,” he said.

The EC issued a yellow card warning to Vietnam last year, after the country failed to demonstrate sufficient progress in the fight against IUU fishing worldwide. While the measure was only considered a warning, which should not technically affect the EC’s trade policy, the Vietnamese fishing industry was concerned that the yellow card would seriously harm the reputation of Vietnamese seafood worldwide, and thus weakening sales.

To address IUU fishing activities, the EC evaluates exporting countries. Countries that fail to meet EC standards are issued a “yellow card” warning, followed by a “green card” if issues are resolved or a “red card” if they are not. A red card can lead to a trade ban on fishery products.

According to EC requirements, the Vietnamese seafood sector had to implement nine recommendations in six months from October 23, 2017 through until April 23, 2018.

The nine recommendations included revisions of the legal framework to ensure compliance with international and regional rules, applicable to the conservation and management of fisheries resources; ensuring the effective implementation and enforcement of the country’s revised laws; and strengthening the effective implementation of international rules and management measures.