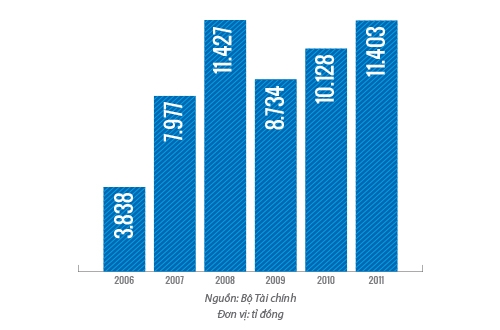 Though powerful SOEs have no more chances to set up new commercial banks, they still can invest in the banking sector, as some licensed banks needed to increase their charter capital to meet the requirements.

The names of commercial banks, one after another, have appeared in the investment portfolios of 11 state-owned economic groups and 10 general corporations.

Economic groups and general corporations accounted for 87.1 percent of the state’s total stockholder equity, in accordance with a report released by the Central Institute of Economic Management (CIEM) in 2012.

These included the Electricity of Vietnam (EVN), which poured capital into An Binh Bank, Vinatex into Navibank, PetroVietnam into Ocean Bank, and Vietnam Rubber Group into SHB.

A report showed that by the end of 2010, state-owned economic groups and general corporations had invested VND20 trillion into the finance & banking sector, 46.4 percent of which went to commercial banks.

The proportion of 46.4 percent represented a significant decrease from the 62 percent in 2006. This was because SOEs, when looking for non-core business fields to invest in, preferred stocks and real estate projects to banks.

Why did SOEs all try to inject money into banks? The fat profits from the business sector could be an answer. However, analysts pointed out that the more important reason that prompted investors to pour money into banks was that the investment allowed SOEs to drive the cash flow.

Once SOEs contributed capital into commercial banks, they automatically become VIP clients of the banks, i.e. they would be able to borrow money at any time and at preferential interest rates.

The documents used for the Fulbright Economics Teaching Program (FETP) showed that in 2010, ABBank bought VND1 trillion worth of EVN’s bonds. Prior to that, in 2007, ABBank also bought EVN’s bonds and acted as the guarantor for EVN’s bond issuance.

At that time, providing capital through bonds was not counted when calculating credit growth rates.

In return, ABBank also benefited from accepting EVN as shareholder. EVN’s deposit accounts at ABBank in 2010 and 2011 were VND24 trillion and VND9.5 trillion, considerably large at a time when banks faced liquidity problems.