Some seaports overloaded, others left idle
Seaports in Vietnam have not been exploited in a reasonable way: some of them are overloaded, while many others have been unused.
Go Back 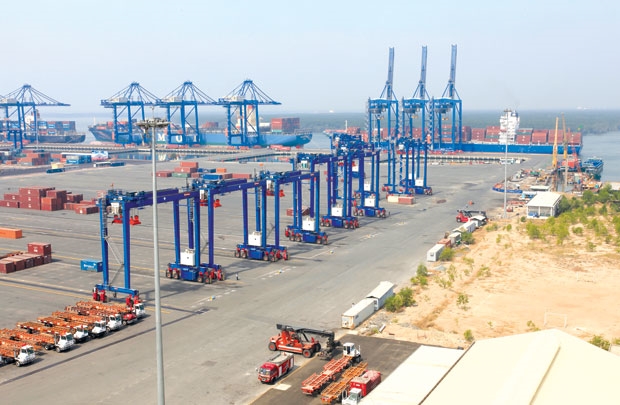 Le Phuoc Vu, chair of Hoa Sen Group, said he had decided to set up Hoa Sen’s factory in Phu My Industrial Zone (IZ) in Ba Ria – Vung Tau province because of the Cai Mep – Thi Vai and Tan Cang Phu My ports.

However, Hoa Sen has been meeting difficulties in recent years, because there are very few carriers transporting container goods docking at the ports.

As a result, Hoa Sen’s export goods have to travel 160 kilometers from its Phu My IZ to ports in HCM City before they are shipped to other countries. The itinerary has caused Hoa Sen’s transport costs to increase by 3 times.

If Hoa Sen’s goods can be shipped from Phu My Ports, the group would have to pay VND1.7 million only in domestic transport cost for a 24-ton container.

Meanwhile, under the current conditions, Hoa Sen has to pay VND4.25 million per container, because it has to carry goods to Cat Lai Port in HCM City.

The Cai Mep – Thi Vai port complex, for example, has been running at low capacity. The problem is that shipping firms find it difficult to persuade customers to use the ports.

Deputy head of the Vietnam Maritime Bureau Bui Thien Thu confirmed that the Cai Mep – Thi Vai is running at 15 percent of capacity, while Cat Lai Port in HCM City is overloaded.

HCMC’s Vice Mayor Tat Thanh Cang said city authorities have been aware of the problem and they are reconsidering the goods volume so as to set up a more reasonable development plan for the ports.

Meanwhile, HCM City has been warned that from the third quarter of 2016, Samsung Electronics would begin exporting consumer electronics from its factory in the city. This means there would be 500 more containers of goods transported every day in the city.

HCM City wants to settle infrastructure problems soon, and has called for investments from the public into transport projects. Most recently, Cang, at a meeting with Rashed Abdulla, vice president of DP World in late October, suggested that the group can invest in roads that connect the beltways.