Starbucks sells Dalat coffee at local shops
Starbucks Reserve coffee grown in Cau Dat District, Dalat City has been made available for guests to order at Starbucks stores in Vietnam.
Go Back 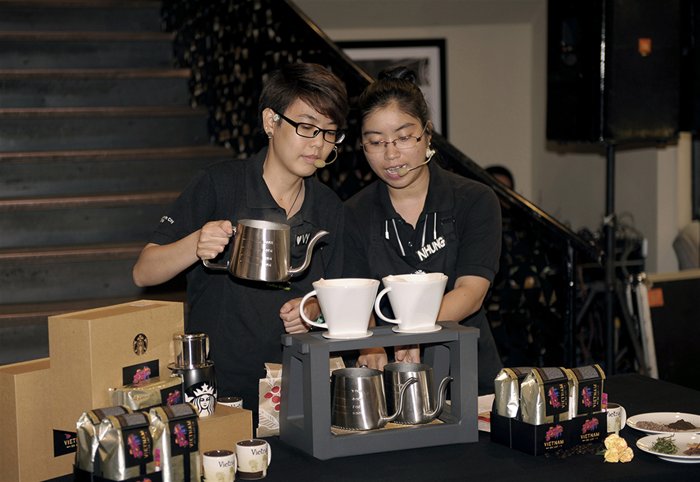 Baristas of Starbucks Vietnam guide how to prepare cups of Starbucks coffee from the Dalat coffee. Starbucks Reserve coffee grown in the Central Highlands city of Dalat is now available at Starbucks shops in Vietnam

Patricia Marques, general manager of Starbucks Vietnam, told reporters on Sunday that the company had worked with farmers and distributors for seven years before it was launched at its shops in Vietnam at the start of the new year.

Marques said the coffee had been sold at select Starbucks shops in the U.S. and some other countries since July 2014 before the company launched the product in Vietnam.

Starbucks said many customers and partners worldwide have expressed appreciation of the Dalat coffee, which has a slight sour flavor and can be blended using an espresso machine or brewed.

Starbucks has been searching for quality Arabica beans since 1971. Dalat coffee is the seventh Arabica product picked by the company after that of Indonesia, Kenya, Rwanda, Brazil, Colombia and Guatemala.

To produce the Starbucks Reserve, 150 farmers in Cau Dat have joined hands with Starbucks experts to plant coffee under the company’s strict C.A.F.E (Coffee and Farmer Equity) criteria. Accordingly, each household can only grow no more than three hectares and has to harvest beans by hand. These beans are then transported to a roasting and packaging factory in Seattle in the U.S. and the processed products at this facility are distributed to over 21,500 stores in 56 countries worldwide.

Marques said the launch of Dalat coffee marked an important milestone not only for Starbucks but also for Vietnam coffee brand. But the volume remains limited as it is only enough for Starbucks shops in Vietnam in four months and the world market in two months.