Thai groups eager to purchase shares of 12 big SOEs in Vietnam
Thai groups are waiting for the Government of Vietnam’s implementation of a plan to divest itself from 12 major State-owned enterprises (SOEs), especially those operating in the fields of drinks and construction materials, Nikkei reports.
Go Back 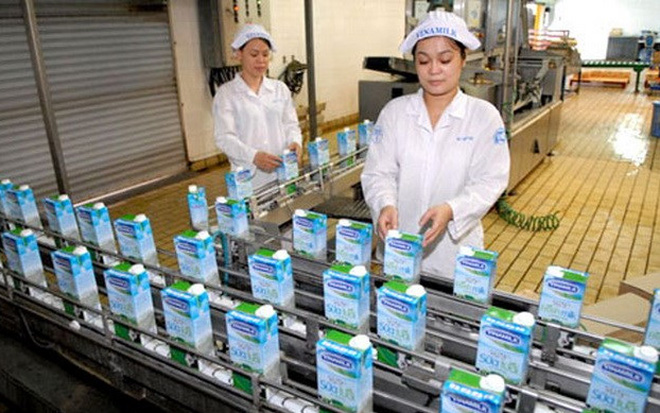 Foreign investors are interested in selling all shares in 12 large SOEs of the Vietnamese Government, Nikkei Asian Review commented. According to the roadmap, the government will complete divestment from 12 large SOEs, including Vinamilk, the largest milk producer in the country, in late 2017.

The divestment of state holdings in the Vietnam National Dairy Products Company (Vinamilk) is to be conducted before the end of this year while divestment from nine other SOEs will be conducted in early 2017.

The State Capital Investment Corporation (SCIC) is preparing a detailed divestment plan for Vinamilk for submission to the Ministry of Finance (MoF) and the Prime Minister, according to a press release on September 14.

The market value of the State holdings in Vinamilk, at nearly VND93.49 trillion ($4.2 billion), means the divestment will be split into multiple stages, said Deputy Director of the Corporate Finance Department at MoF Dang Quyet Tien.

Based on market value, Vinamilk is considered its most valuable investment. The SCIC holds 44.73 percent, or 649.26 million shares, equivalent to almost $4.2 billion. Last year Vinamilk paid a dividend of VND2.705 trillion ($123 million) to the SCIC.

This year these companies plan to pay dividends primarily in cash. Sixty per cent of the Vinamilk dividend is to be paid in cash while Binh Minh Plastics and Tien Phong Plastics have offered to pay shareholders 45 percent and 25 percent of dividends in cash, respectively. This major source of dividends, and especially the fact they will come in the form of cash, made it difficult for the SCIC to decide to sell.

Many investment funds from Japan, the US and Europe are keeping an eye on Vinamilk.

However, according to Nikkei Investment Review, the strongest candidate is Thai Beverage, the owner of Chang beer and Mekhong wine brands in Thailand.

Vinamilk is attractive to foreign investors, including Thai Beverage, because it is the leading business in the local milk industry, and now is stretching its reach to global markets.

It now owns 10 farms and 13 factories in Vietnam, along with three plants in the US, New Zealand and Cambodia. It also has a subsidiary in Poland and is promoting the export of its products to new markets like Thailand, Myanmar and Africa.

The firm’s products have been sold in 43 countries around the world, including the Republic of Korea, Japan, China, Turkey, Russia, Canada, the US and Australia. It is working to make inroads in Europe, Africa and South America.

At the Summer Fancy Food Show in the US last July, Vinamilk and its subsidiary Driftwood Dairy Inc. introduced two condensed milk and cream products made in Vietnamese factories.

Those products satisfied strict regulations in the US and were recognized by the country’s Food and Drug Administration and Department of Agriculture, affirming the standing of Vinamilk products.

The firm spent $10 million to purchase all the shares in the Driftwood factory – a leading milk producer in Northern California, the US. Driftwood earned $119 million in revenue in 2015, contributing 6.5 percent to Vinamilk’s total revenue.

Last May, the dairy maker inaugurated the Angkor milk factory in Phnom Penh, Cambodia. It is expected to manufacture more than 19 million litres of liquid milk products, 64 million cups of yogurt and 80 million cans of condensed milk when at full capacity. The plant is expected to generate $54 million in revenue in 2017.

Meanwhile, the Miraka factory in New Zealand – Vinamilk’s first foreign invested project – was put into operation in August 2011. The company raised its ownership in the facility from 19.3 percent to 22.81 percent in 2015. Miraka has a milk powder processing line and another for pasteurized fresh milk.

In 2014, Vinamilk was licensed to open a subsidiary in Poland which produces materials for production activities of the parent company and other subsidiaries. This affiliate shipped abroad nearly 18,000 tonnes of milk powder worth $33 million in 2015.

Sabeco accounts for 40% of the beer market in Vietnam. The 89.6% state capital in Sabeco is now targeted by many investors, including Asahi Group Holdings and Kirin Holdings (Japan); Anheuser-Busch InBev (Belgium), and Boon Rawd Brewery of Thailand.

Meanwhile, Habeco is holding 20% of the Vietnam beer market and will likely be acquired by Carlsberg (Denmark) because it already has a stake in the firm.

The attractiveness of Sabeco and Habeco comes from the growth of the beer market in Vietnam.

It is expected that Vietnam will overcome Japan to become the 2nd largest beer market in Asia in the period 2020-2025.

Nikkei Asian Review said that the shares of Tien Phong Plastic and Binh Minh Plastics may be acquired by Siam Cement, the largest construction material producer in Thailand. Siam Cement has a stake in these two companies.

The plastic market of Vietnam is growing at 20-25% per year. Therefore, Thai investors are very willing to pour money into these firms.

By the end of 2015, Vietnam had about 800 state-owned enterprises. From January to July this year, the government completed divestments from 60 SOEs, grossing more than $233 million.

However, the government’s divestment from the 12 large SOEs ihas attracted serious interest from foreign investors. According to SCIC, divestment from Sabeco can gross $1.8 billion and more than $400 million from Habeco.