Thai, Malaysian goods rush into Vietnam
The ASEAN Economic Community which is now in effect will cause products from ASEAN countries, especially Thailand and Malaysia, to penetrate the Vietnamese market.
Go Back 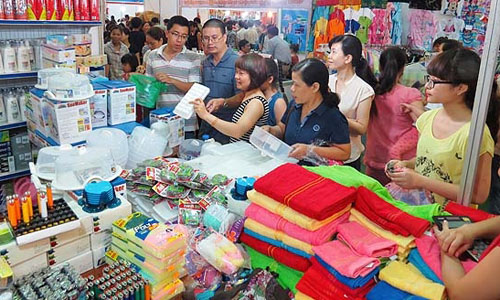 The ASEAN Economic Community which is now in effect will cause products from ASEAN countries, especially Thailand and Malaysia, to penetrate the Vietnamese market.

More than 23,000 cars were imported to Vietnam in the first 11 months of 2015 from Thailand. The country has replaced South Korea as the biggest automobile exporter to Vietnam.

Meanwhile, fruits, sweets and consumer goods from Thailand and Malaysia have flooded traditional markets and supermarkets in Hanoi.

At a supermarket on Khuong Dinh street in Thanh Xuan district, most confectionary products are sourced from ASEAN countries, from Dynamite Choco candy to Bin Bin rice pastry to Hiro egg cake. Sliced fries are mostly from Malaysia (Ligo, Kinos), while plastic boxes are mostly from Thailand.

Thai farm produce, not only rice but fruits as well, can be seen everywhere at traditional markets and supermarkets in Vietnam.

A saleswoman at the supermarket said ASEAN products were favored by Vietnamese housewives who believe the products have high quality while they are much cheaper than imports from Europe and the US.

More and more ASEAN goods will be available in Vietnam. The initiatives, action plans the tariff cutting programs will be implemented to form up an ASEAN economic community with 640 million consumers and the expected trade turnover of $2.5 trillion.

A report of the General Department of Customs (GDC) showed that Thailand is leading the bloc in terms of exports to Vietnam with export turnover reaching $7.5 trillion in the first 11 months of 2015, an increase of 17 percent compared with the same period of 2014.

The trade deficit with Thailand had climbed to $4.5 billion by that time, up by 40 percent.

Meanwhile, the trade deficit with Malaysia was $500 million, much higher than $140 million of the same period in 2014. The major import products include fruits, machines and equipment, electronics and electronic components, household electric appliances and cars.

According to Le Minh Thuy from the General Statistics Office (GSO), Vietnam imported roughly $5.5 billion worth of products from ASEAN in 2015, an increase of 45 percent over the year before.

ASEAN is the third largest market with which Vietnam has a trade deficit, after China and South Korea.

Thuy noted that the trade deficit with Thailand soared in 2015 while it was modest in the years before.

Meanwhile, Vietnam exported more to Malaysia than it imported from the country in previous years, but unexpectedly saw a trade deficit in 2015.