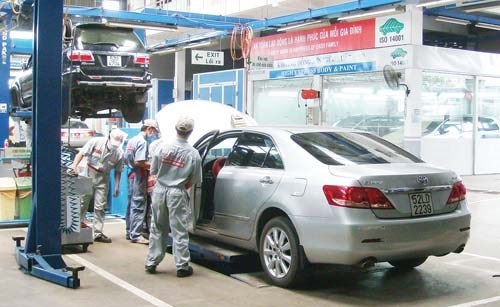 The Vietnamese subsidiary of Japanese auto giant Toyota has found itself in hot water after expressing its unhappiness with the local auto market and the government’s tax policy at a conference in Hanoi on Tuesday.

Dao Phan Long, vice chairman of the Vietnam Association of Mechanical Industry, said given its 20-year history in Vietnam, Toyota can obviously see how potential the market is, even though it keeps threatening to make an exit.

With the population expected to hit 100 million soon and the government’s current focus on transport infrastructure, Vietnam is a “lucrative” car market, Long said.

“I dare Toyota to leave,” he said.

At Tuesday’s conference, Toyota Vietnam’s representative Pham Anh Tuan reportedly commented on the small market. According to media reports, he said Vietnam’s is equivalent to just 5-10 percent of Thai and Indonesian markets.

Most of international automakers have already made their presence in ASEAN countries, but while they are successful in other countries they have yet to find success in Vietnam, due to the market’s size and high taxes, Tuan said, as cited by news website Saigon Times Online.

He warned that manufacturers will hardly survive competition from cheap imports in 2018 when Vietnam is set to remove its tariffs on cars imported from other ASEAN countries under a regional agreement.

Toyota and many other foreign car makers have been urging the government to give them tax breaks and incentives, so they can compete against cheap imports.

At a press conference in April, company president Yoshihisa Maruta said it is considering ending its manufacturing business in the country and focusing on importing cars instead.

He asked the government to revise its policy, giving preferential treatment to only businesses which are capable of adding value to the production chain.

Nguyen Thi Xuan Thuy, a researcher with the Industrial Policy and Strategy Institute under the Ministry of Industry and Trade, agreed, suggesting the government should give more support to car component producers.

Tax policy also needs to be revised to increase the competitiveness of cars produced in Vietnam, she said.

Vietnamese cars are now more expensive than those made in other ASEAN countries such as Indonesia and Thailand, given taxes and fees account for 40-50 percent of their prices, and their production costs are 20 percent higher than those of others, according to Thuy.