Travel
From the island-studded seas of the north to the meandering waterways of the south, Viet Nam is a country defined by the diversity of its land and the resilience and generosity of its people. Lonely Planet Traveller magazine shows you how to take the perfect trip to Vietnam.
Go Back

From the island-studded seas of the north to the meandering waterways of the south, Viet Nam is a country defined by the diversity of its land and the resilience and generosity of its people. Lonely Planet Traveller magazine shows you how to take the perfect trip to Vietnam. 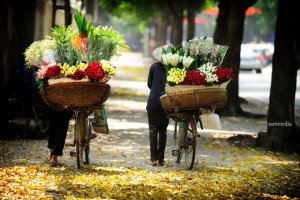 Once upon a time, a friendly dragon lived in the heavens above Halong Bay. With invaders from the seas threatening Vietnam, the gods asked the dragon to create a natural barrier to protect its people. The dragon kindly obliged, performing a spectacular crash landing along the coast – digging up chunks of rock with its flailing tail and spitting out pearls – before grinding to a halt. This scene of devastation is now known as Halong Bay – Halong literally translates as ‘where the dragon descends into the sea’.

Less exciting explanations of this landscape involve eons of erosion by winds and waves – but nobody disputes the splendour of the end result. Rising from the shallows of the Gulf of Tonkin are thousands of limestone islands – towering monoliths lined up like dominoes, some teetering at worrying angles. The islands’ names testify to the overactive imaginations of sailors who’ve spent too long at sea – Fighting Cock Island, Finger Island, Virgin Grotto. Having largely resisted human settlement, the islands have become home to other creatures. From above, sea eagles swoop down to pluck fish from the waters, carrying their prey – still flapping – high into the air, and squawking congratulations to each other from their nests.

It’s rush hour in Ha Noi, and the streets of the city’s Old Quarter throng with hundreds of scooters. The pavement and the central reservation are fair game in the chaos; zebra crossings exist more as a personal challenge than a guarantee of safe passage. Hanoi is a city that refuses to grow old gracefully – a millennium-old capital of crumbling pagodas and labyrinthine streets, now undergoing a werewolf-like transformation into a 21st-century Asian metropolis. In the Old Quarter, ancient temples now neighbor karaoke joints, and dynasties of artisans ply their trade next to shops selling cuddly toys the size of grizzly bears.

Few have studied the changing face of the city as closely as Do Hien, an artist who has spent a lifetime painting Hanoi’s streets. He welcomes me to his studio, and idly leafs through sketches of city life – couples waltzing beside the willows of Hoan Kiem Lake, and alleyways where hawkers prepare steaming bowls of pho. ‘Hanoi is a place that runs in your blood,’ Hien says thoughtfully, sitting cross-legged among stubs of incense sticks and paintbrushes strewn across his studio floor. ‘Had I not lived in this city I might not be able to paint like I do.’

An evening fog hangs over Sapa. Clouds sporadically open up a bit to reveal a village, a chunk of a mountain, a patch of jungle, before obscuring them from view again, like stage scenery sliding into the wings. Eventually the clouds lift, and the Hoang Lien mountain range emerges. It is a landscape of extraordinary beauty – the Asian highlands half-remembered from childhood picture books and martial-arts films. Above are peaks thick to their summits with greenery. Below, rice terraces run down the hillsides at right angles, as neatly as the folds in origami paper.

Sapa is a town where the weather seems to operate on random rotation – switching between brilliant sunshine, thick fog, driving rain and occasionally a dusting of snow, before coming full circle to brilliant sunshine, often all within the space of a few minutes. A hill station settled by Vietnam’s French colonists, Sapa now serves as a trailhead for hikers happy to run the meteorological lottery of a walk in these mountains. ‘We have four seasons in one day here,’ explains Giang Thi Mo, my guide, shimmying along the edge of a rice paddy as a rain cloud approaches. ‘There’s no way to predict the weather – just be lucky!’

We pass through a village, and Mo points to bamboo irrigation systems that send trickles down the hillsides and into rice pounders that see-saw with the current. ‘There’s a Hmong saying that “we flow with the water”,’ she explains. ‘It means we don’t worry too much, and take things easy.’

Hoi An: best for food

Hoi An  is a small town that likes a big breakfast. As dawn musters strength on the horizon, a small army of chefs sets to work on Thai Phien street – firing up gas cookers and arranging plastic furniture on the pavements. Soon, the city awakes to sweet porridges; coffee that sends a lightning bolt of caffeine to sleepy heads; sizzling steaks; broths that swim with turmeric, chilli and ginger. In Vietnam, street food is a serious business – a single dish prepared day after day by the same cook, perfected and honed by a lifetime’s craft.

‘Food in Hoi An is about yin and yang,’ explains Le Hanh, a young female chef scrutinizing vegetables at the morning market. ‘It’s about balancing hot with cool, sweet with sour, salty with spicy.’ True to Hanh’s philosophy, cooking in Hoi An goes big on contrasting flavours; food that plays good cop/bad cop with the palate. The sharpness of fish sauce blends with the subtlety of fresh herbs; cool lemongrass makes way for the eye-watering panic of accidentally chomping on a red chilli.

A heavy rain is falling on the Mekong Delta, flooding the footpaths, swilling in the gutters, turning riverbank mud from light tan to a rich coffee colour. A tangled network of rivers, tributaries and canals, the waters of the delta criss-cross the lowlands of southern Vietnam, before emptying out into the South China Sea through mighty, yawning estuaries. For centuries, life here has ebbed and flowed in tandem with the current of the Mekong – an all-in-one launderette, bathtub, highway, toilet, dish-washer, larder, social club and workplace for the communities surrounded by its waters.

‘If you live on a river island with twenty other people you have to learn to get along with everyone,’ explains Mrs Bui Nguyen, beckoning strangers to shelter in her bungalow beside the Cai Chanh canal. ‘That’s the reason why people in the Mekong are so friendly!’ A 77-year-old who attributes her longevity to a lifetime avoiding doctors, Mrs Nguyen wistfully reflects on the delta of old – in days when the only artificial light came from peanut oil lamps dotted along the riverbanks; an age long before roads had reached the villages. Times have changed. However, human life still instinctively congregates on the water’s edge. Lining the riverbank nearby are grocers’ shops, cafés, a gym, a billiards club and a blacksmith’s. Floating markets, too, are still held every morning at nearby Cai Rang – with creaking barges from across the delta bashing into each other as they offload cargoes of watermelons, pineapples and turnips.