Treasury to mobilise more capital from Government bonds
The state treasury of Việt Nam offloaded more than 92 per cent of the bonds planned for the year as of August 24, according to the Hà Nội Stock Exchange.
Go Back 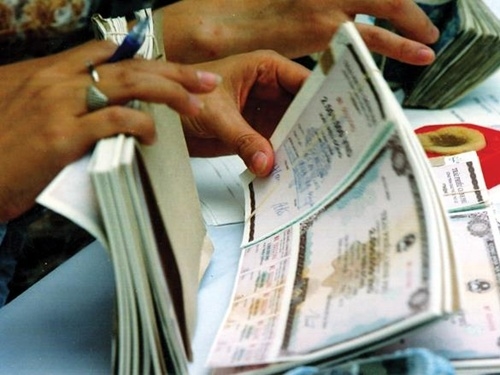 As of August 24, the treasury has mobilised more than VND231 trillion (US$10.34 billion) or more than 92 per cent of the year plan

As of August 24, the treasury has mobilised more than VNĐ231 trillion (US$10.34 billion). In particular, the exchange said the treasury sold all five-year bonds worth VNĐ3 trillion at a coupon rate of 5.79 per cent per annum, 0.13 per cent lower than that of the previous session on August 17. Following higher demand, it also sold same term bonds of VNĐ900 billion with the same coupon rate.

Similarly, seven-year bonds worth VNĐ3 trillion were sold at a coupon rate of 6.35 per cent per annum, 0.14 per cent lower than the last session. The treasury also sold bonds worth another VNĐ900 billion at the same rate due to demand.

Thus, compared to the revised plan of VNĐ250 trillion in bonds for 2016, to which was added another VNĐ30 trillion after good sales in the first half, G-bond sale has reached more than 92 per cent.

Bảo Việt Securities Company (BVSC) said the state treasury would soon complete mobilisation plans of government bonds this year and mobilise more capital from G-bonds in the last few months of the year.

The firm said that with less pressure to meet targets, the interest rates of the bonds may fall, making them more attractive to investors.

According to the treasury, the sale of bonds for five-year and 15-year terms exceeded the target. On the other hand, the treasury could not sell any of its 20-year bonds worth VNĐ1 trillion when offered in the August 24 auction.

Deputy Prime Minister Vương Đình Huệ welcomed insurance firm AIA’s chairman Mark Edward Tucker on August 25 and said the country had set a bond sale target of 35 per cent of the GDP by 2020, especially bonds with long terms of 15 to 20 years.

He said the AIA Group could invest more strongly in the long-term G-bonds market, while the AIA head reaffirmed their commitment to long-term investment such as G-bonds, infrastructure and the healthcare system