Two-thirds of European businesses optimistic about investment environment
Nearly two-thirds of European businesses in Vietnam are optimistic about the country’s investment environment, according to the Business Climate Index (BCI) for the fourth quarter of 2017 released by the European Chamber of Commerce in Vietnam (EuroCham) on March 8.
Go Back 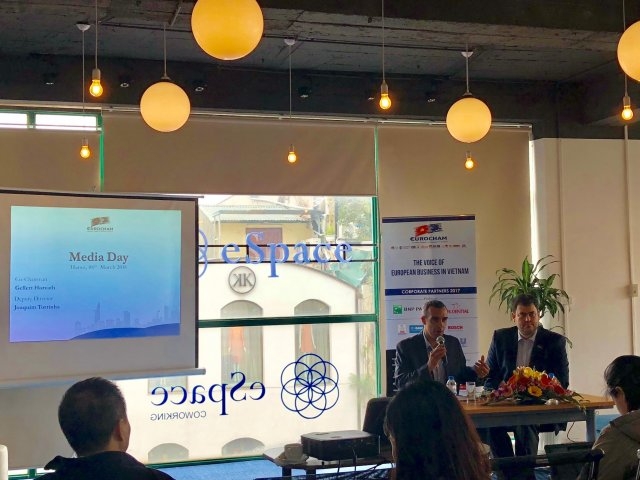 Sixty-four per cent of members described the investment environment as good or excellent, while 10 per cent were not optimistic.

Seventy per cent are optimistic about doing business in Vietnam in the future.

Nearly half of surveyed European enterprises said they would employ more workers in the time ahead, according to Mr. Joaquim Torrinha, Deputy Director of EuroCham. They employed 120,000 people last year.

Also, “47 per cent responded they are going to employ more in the future, while 38 per cent aim to maintain their labor force and only 15 per cent are considering cutting down their staff numbers,” according to the report.

Fifty per cent are looking to expand their investment in Vietnam and manufacturing is the most favored sector, Mr. Torrinha said.

Mr. Torrinha said that EuroCham will release the 10th edition of its Whitebook in Hanoi on March 15 at its “Whitebook Launch and EU-Vietnam Free Trade Agreement Outlook 2018” event. This is its landmark publication on trade and investment issues and recommendations.

The event will feature a unique discussion on trade and investment topics, with a focus on the role of the European business community in the Vietnamese economy. In attendance will be ministers and other senior officials as well as leaders from the Vietnam Chamber of Commerce and Industry (VCCI) and the EU Ambassador to Vietnam, H.E. Bruno Angelet. Its Green Book will also be released on March 15.