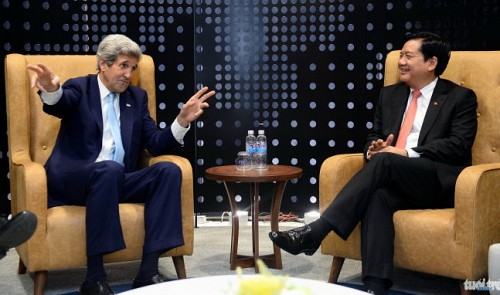 The information was provided by Elizabeth L. Littlefield, president and CEO of the U.S. government’s Overseas Private Investment Corporation (OPIC), who led a delegation of OPIC officials on a working visit to Ho Chi Minh City on Tuesday.

OPIC is the U.S. government’s development finance institution that works to mobilize private capital to help address critical development challenges and advance U.S. foreign policy and national security priorities, according to its statute.

During Barack Obama’s presidency, OPIC’s investment in the Asian region increased threefold to $4 billion, though its portfolio in Vietnam is limited to only a few notable projects, Littlefield said.

In the context of Vietnam’s entrance into a new era of increased foreign investment, its manufacturing sectors are increasing their presence in the global supply chain, with U.S. investors taking particular interest in the Vietnamese market, especially in projects connected with renewable energy, agriculture, and information technology, the OPIC executive said.

The president and CEO added that OPIC only provides financial assistance to private projects that are commercially viable, have a sound business plan, and can sufficiently contribute to Vietnam’s development.

Partners of each project must also practice good business ethics and sternly adhere to labor and environmental regulations.

In order for a project to be eligible for financial aid from OPIC, it must have the participation of a U.S. company and not have been funded by any commercial bank.

The scale of OPIC-invested projects can range from $1 million to hundreds of millions of U.S. dollars, Littlefield said.