Vietnam a global bright spot in 2015
Viet Nam's economic growth has continued to firm up in 2015 with gross domestic product (GDP) forecast to expand 6.3 per cent in the first half of this year, according to the World Bank's latest Taking Stock report released yesterday, July 20.
Go Back

The bank’s semi-annual review of Viet Nam’s economic performance said the first half growth rate was the nation’s fastest in for the past five years, and it was among the best performers in the region and the world.

The recovery was driven by strong activity in manufacturing and construction, which grew by 9.9 per cent and 6.6 per cent, respectively, contributing nearly half of overall GDP growth.

However, except retail sales which performed strongly with a rise of 8.3 per cent in the first six months, up from 6.3 per cent in 2014, overall services (which account for almost 40 per cent of GDP) rose modestly at just 5.9 per cent.

On the demand side, strong growth was led by investment, spurred by strong FDI inflows, and stronger private consumption boosted by low inflation. The contribution of net exports turned negative during the period, however, due to slower export growth while import continued to rise on the back of stronger domestic activity.

The consumer price index rose just 1 per cent year-on-year in June, down from 5 per cent a year earlier. This has enabled the central bank to further lower interest rates, including relaxation of limits on short-term deposits and risk weights for certain lending activities.

Credit growth is picking up to an estimated 2.65 per cent in the first quarter of the year.

According to Victoria Kwakwa, the World Bank’s Country Director for Viet Nam, credit is increasing thanks to higher demand spurred by strong investment and private consumption. 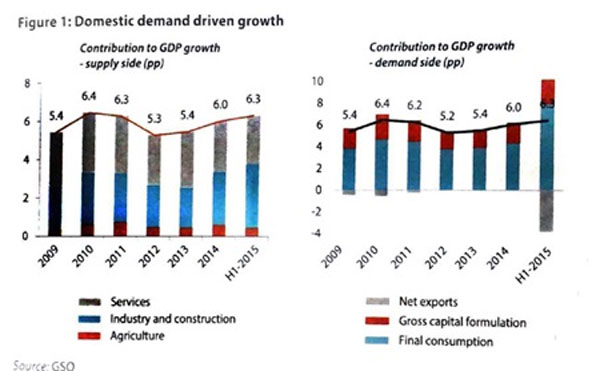 The central bank has also been flexible in allowing big banks more room to lend, she said.

At the same time, the report said persistent fiscal imbalances are a concern against the backdrop of rising public debt. The nation’s debt has risen rapidly in recent years and debt servicing costs could pose an increasing burden on budget, it cautioned.

The budget deficit reached nearly VND75 trillion (US$3.5 billion) in the first five months, accounting for a third of the annual target of 2015. Meanwhile, total public and publicly guaranteed debt increased further to an estimated 59.6 per cent in 2014, up from 54.5 per cent in 2013.

The drop in exports and increase in imports have also resulted in a significant current account deficit in the first quarter of 2015. The nation recorded a trade deficit of over $3 billion in the first five months, compared to a surplus of $2.1 billion in 2014.

The report also said progress on structural reforms has been less strong, especially regarding State-owned enterprises (SOEs) and the banking sector.

SOE equitisation has slowed down in 2015 with only 29 firms equitised in the first quarter of the year out of the annual target of 289. Consolidation in the banking sector accelerated with a number of acquisitions of smaller banks by major State-owned commercial banks.

“However, the lack of an appropriate legal framework and the Viet Nam Asset Management Company’s own limited capital base and operational capacity remain constraining factors for resolving bad debts,” said Sandeep Mahajan, the bank’s chief economist in Viet Nam.

The report said Viet Nam’s economic outlook was favourable, with GDP projected at 6-6.2 per cent for the year. It also said sluggish structural reform could lower the growth potential, and global risks, which are tilted to the downside, could also have negative impacts on domestic recovery.