Vietnam breaks export growth record in 2017
From textile and garment to mobile phones, Vietnam's 2017 export-import picture was bright with a record $425 billion.
Go Back 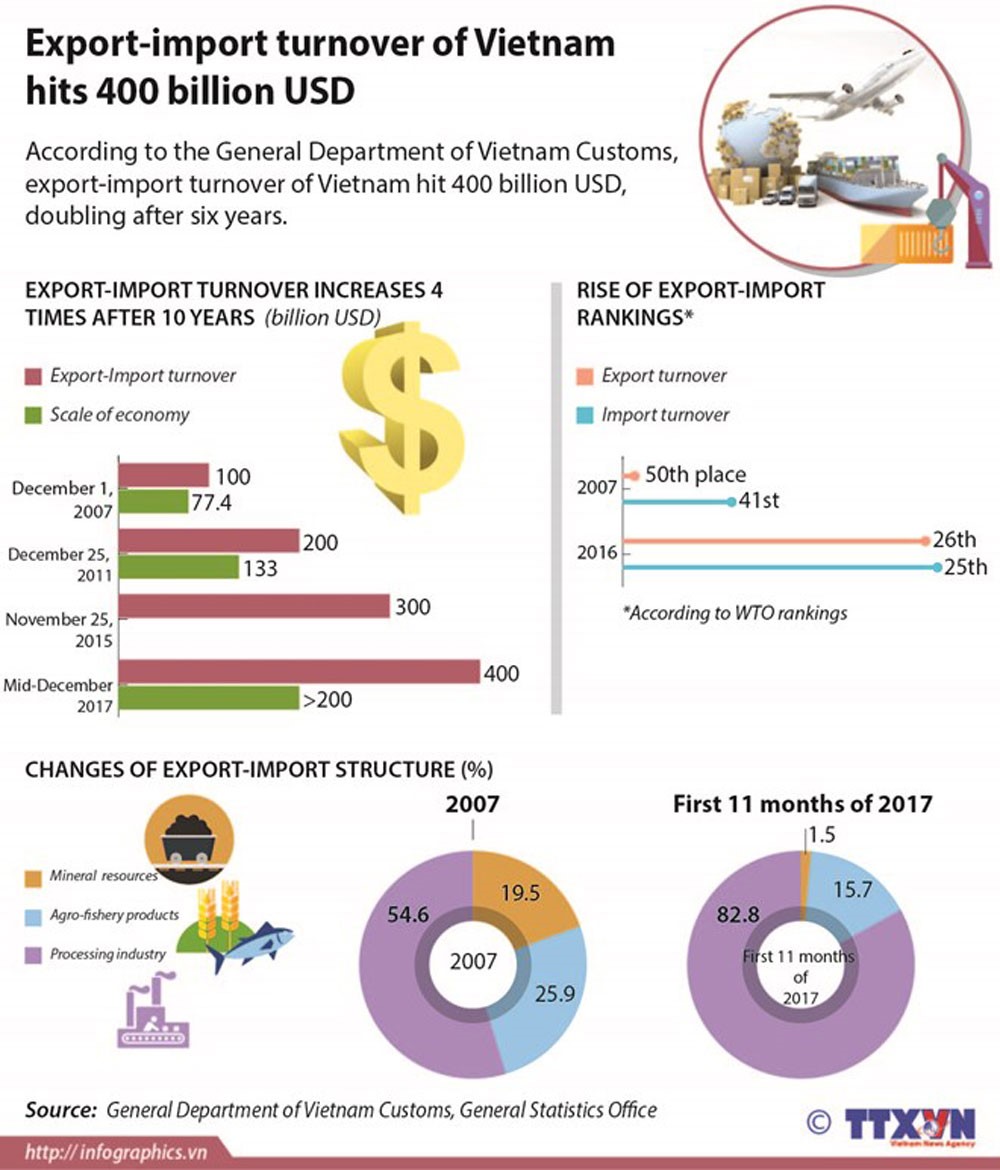 Despite facing many challenges in the first two quarters of this year, with orders from importers falling sharply and the US—Vietnam’s biggest export market for textile and garment—withdrawing from the Trans Pacific Partnership (TPP), Vietnam earned $31 billion from textile and garment exports in 2017, a year-on-year increase of 10.2 per cent, and posting a trade surplus of $15.5 billion for the first time ever.

Chairman of the Vietnam Textile and Apparel Association (Vitas) Vu Duc Giang told VIR that, “The year of 2017 was a tough year, but Vietnamese textile and garment sector made a breakthrough, turning over last year’s falling $2 billion short of meeting the annual export target of $30 billion.”

With the impressive result, Vietnam ranks as the world’s 26th textile and garment exporter (in terms of turnover) as well as made huge contributions to Vietnam’s export picture.

The General Statistics Office (GSO) released a report last week, stating that in 2017 Vietnam’s export turnover reached $213.77 billion , up 21.1 per cent compared to the previous year—the highest-ever increase. In this, the domestic sector contributed $58.53 billion, an increase of 16.2 per cent, while foreign-invested enterprises posted an import-export turnover of $155.24 billion, up 23 per cent year-on-year.

Nguyen Bich Lam, director general of GSO, said that this year is considered a miracle because previous years’ exports of crude oil and natural resources account for a very large share in the export structure. The year of 2017, on the opposite, electronic components and mobile phones occupy the highest proportion in the structure.

Samsung Vietnam and its affiliates in the country also made significant contributions to the Vietnamese exports, expecting to obtain an export revenue of $50 billion in 2017.

According to a report of Samsung Vietnam, the group earned $46.3 billion in revenue last year, despite stopping the production of Galaxy Note 7 phone devices. The corporation’s export value hit $39.9 billion, accounting for 22.7 per cent of Vietnam’s export turnover and rising 9.9 per cent compared to the previous year.

Tran Thanh Hai, deputy director of the Import-Export Department under the Ministry of Industry and Trade, told VIR that unexpectedly, vegetable and fruit exports were also positive, estimated to reach $3.52 billion, a sharp year-on-year growth of 43.2 per cent.

Hai added this high export growth contributed to a trade surplus this year.

Vietnam witnessed a trade surplus of $2.7 billion this year, according to GSO, an unexpected turn of events as the National Assembly previously only targeted a trade deficit of some 3.5 per cent of the total export turnover.

He added that both foreign and local firms invested into facilities to ensure materials supply for themselves or to become a vendor for international firms. The automobile, mobile phone, and textile and garment sectors are increasing localisation rates in Vietnam to reduce costs and ensure a stable supply of components.

Samsung reported that through great efforts to seek out and connect Vietnamese vendors, the number of Samsung’s tier-1 Vietnamese vendors has increased dramatically from four businesses in 2014 to 29 at the moment.

Working towards the target of having 50 tier-1 vendors by 2020, while promoting the development of Vietnamese supporting industries, Samsung has collaborated with MoIT to expand the business consultation programme by establishing an advisory board to implement the programme on a larger scale.

The National Assembly of Vietnam adopted a socioeconomic development plan for 2018. Accordingly, the country’s export value is expected to increase by 7-8 per cent and trade deficit is to be maintained at 3 per cent of total export revenue.

When asked whether this target is modest, Lam from GSO said that it is entirely reasonable as the World Bank had forecasted global trade growth at 3.8 per cent, lower than the 4 per cent in 2017.

However, he warned that this was no easy task as the European Commission has issued a “yellow card” warning to Vietnam that seriously harmed the reputation of Vietnamese seafood around the world, weakening sales, while steel products made in Vietnam are facing anti-dumping measures in some markets.

Giang from Vitas said that the textile and garment sector target to reach about $34 billion in export turnover for 2018, but it is forecast to become fiercer in 2018 as Vietnam’s textile and garment import markets are experiencing unforeseen fluctuations caused by protectionism.

He added that all types of input costs, including workers’ salaries, are on the rise, thus increasing labour productivity through improving technology, equipment, and business management is considered the main solution.