Vietnam cashew industry: the more exports, the bigger losses
Vietnam is still the Number 1 cashew exporter in the world with 65 percent of market share, but cashew companies are facing problems such as lack of raw materials.
Go Back 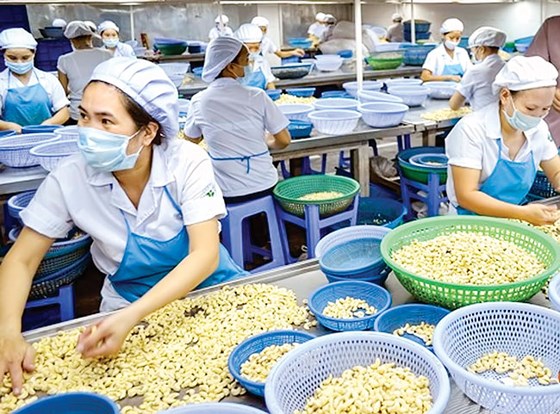 Dang Hoang Giang, deputy chair of the Vietnam Cashew Industry (Vinacas), said by the end of May, Vietnam had exported 141,000 tons of cashew nuts, worth $1.396 billion, an increase of 21.4 percent in quantity and 25.35 percent in value.

It is expected that total export turnover would reach $3.7 billion in 2018, an increase of $80 million over 2017. With the figure, Vietnam will still be the biggest processor and exporter in the world for the 13th consecutive year.

However, the profits Vietnam make are unsatisfactory. In the global value chain, farmers and processors pocket 30-35 percent of profits, while the remaining belongs to foreign roasters and traders.

Vinacas’ report released at a recent conference shows that 80 percent of small and micro enterprises in the industry have suspended production because of losses and lack of materials.

Vinacas and big exporters said that the demand for cashew nuts from international roasters and traders in 2018 increased by 5 percent compared with 2017.

However, in the first five months of 2018, the processing output in Vietnam rose by 25 percent over the same period last year, which led to an oversupply. As a result, processing workshops had to sell products at low prices to recover capital and pay debts.

The production boom and high output not only forced enterprises to sell products at a loss, but led to a short supply of materials for production.

Vietnam is a big exporter, but it has to import materials for domestic production. According to Vinacas’ deputy chair Ta Quang Huyen, in the first five months of 2018, Vietnam imported 283,000 tons of raw materials and collected 370,000 tons from domestic sources.

Meanwhile, 152,000 tons of cashew nuts were exported in the first five months. If noting that 4.3 kilograms of materials yield 1 kilogram of cashew nut, enterprises have processed all the materials in stock. Plants have run out materials since the end of May.

Nguyen Duy Tuan, general director of Lafooco, complained that enterprises have been suffering from price decreases since September 2017.

In Long An province, only 12of 33 enterprises are still operational. In the cashew metropolis of Binh Phuoc, 80 percent of small and micro enterprises have suspended production.

Vinacas predicted that Vietnam can export 370,000-380,000 tons of cashew nuts this year, which means that it would have to import 1 million tons of materials from now to the end of the year.