Vietnam chases away specter of inflation
High inflation, the biggest threat for macroeconomic stability, is no longer a threat and conditions are very favorable for economic development, economists say.
Go Back 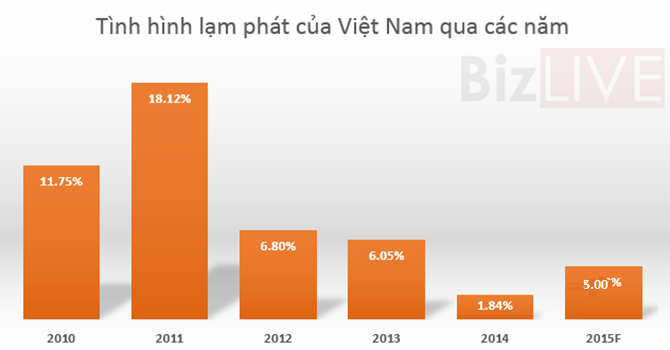 However, the low consumer price index (CPI) increase of 0.13 percent in July compared with the month before has raised concerns.

An analyst, pointing out that the CPI has increased by 0.68 percent so far this year, noted that the increase was ‘not high enough’ to ensure GDP growth rate of 6 percent or higher this year.

“High GDP growth rate will not match with the low inflation rate,” he commented.

Meanwhile, it plummeted to 1.84 percent in 2014, when the national economy was in the most difficult period, and it is forecast to stay at 5 percent this year.

“Low inflation means demand is low and the economy has not warmed up as reported by the government,” he said.

The deputy head of the Economics – Finance Institute, Nguyen Duc Do, noted that the inflation rate is near zero percent and far from the 5 percent target.

The GDP needs to grow by more than 6.5 percent to help the economy stay away from the ‘deflation zone’. If the GDP growth rate is 6-6.25 percent, the economy is likely to fall into deflation.

The institute has warned that deflation risk is even worse than high inflation.

But Dr Nguyen Bich Lam, general director of the General Statistics Office (GSO), denied that low demand was the cause of the CPI, saying that the low CPI increase should be attributed to the stable world market, the government’s management and domestic production and business factors.

“The CPI increase is in line with the government’s plan to curb inflation and stabilize the macro-economy,” he said, adding that except for farm produce affected by the weather, industrial products and services both have seen significant increases.

Le Xuan Ba, a renowned economist, said: “We should feel happy about low inflation instead of feeling worried about this.”

WB, in its latest report, predicted that Vietnam’s GDP growth rate may be 6-6.2 percent this year.